A unique way of numbering found on on the covers and in the matrix of the following titles indicates that they were probably produced within the same time frame:

Al Stewart touring behind his breakthrough album Year Of The Cat. I can still remember how huge it was as 1976 – that hot European summer! – crept along. Radio broadcast source, possibly recorded at the Paramount Theater. I believe the year might actually be 1976.

Some confirmed concert dates based on ticket stubs:

On this vinyl source there are speed problems found throughout all of the tracks. Notes from a remastering project done by ‘Doinker’: “I found out that the speed problems vary from track to track. Each track, while constant is off a differing amount from the track before and the track after it.  What a great show this is! Mr. Stewart was touring “Year Of The Cat”, and is in top form. The tracks on this LP are probably out of concert sequence.”

On The Border
Broadway Hotel
Roads To Moscow
Oh, Carol
Nostradamus
Year Of The Cat
If It Doesn’t Come Naturally, Leave It 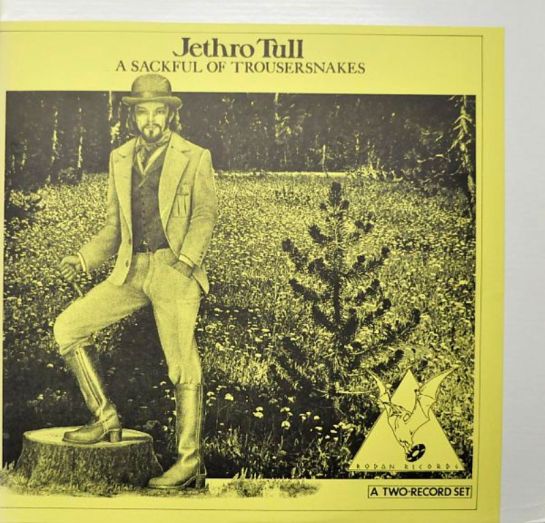 Comments from the needle drop creator and record owner (my comments in [])                “Ruthless Rhymes Records
1971 Made in Germany [This is meant to apply to the Ruthless Rhymes label not the actual disc/pressing but is still wrong, of course], An Original First Pressing  [This is probably not correct]
Matrix on the runoff track is JT-200

Hot Wacks lists this as being on Rodan Records with the same matrix number.
I did get this very soon after the show so I’m guessing that this MAY be the first release
and that the Rodan version is a subsequent release.

5. “A Sackful of Trousersnakes” April 1977 Anaheim Convention Center, LA.
This is by far the most off the hook recording of the Songs From the Wood tour. It was a beautifully crafted set of songs they ever did, starting off with 4 or 5 acoustic songs and the intensity just kept rising to another fantastic head splitting encore. This was BIG Tull at it’s most refined.They didn’t get much better.
As a matter of fact, because of this boot, Bursting Out was a disappointment!

Darin, could not agree more with you about Sackful. This was my very first Tull bootleg, which I purchased in a used record store on vinyl in the late 70’s. This has great Ian banter/jokes, and the audience is totally into the band! One of the “chill bumps” moments for me on this particular tour, has always been when Ian plays Thick as a Brick, and he gets to the flute part, which is the first time he’s played the flute during this show. The crowd goes nuts!! Martin’s solo is fantastic! I used to work third shift, and could bring in cassette tapes to play over the store’s loud speakers. One night I brought in Sackful. I started it with Martin’s solo, and someone asked me if it was Hendrix! True story.