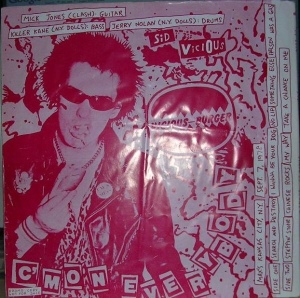 It appears that there are two versions for the cover. Above, showing a standard LP album sleeve and below, a sort of one-panel gatefold open to top + bottom sleeve that wraps around another sleeve in the center:

Other tall tale signs for this version are the the clear plastic sleeve needed to keep it all together:

As well as the white line at the bottom where outside sleeve and inside cover meet:

I do not know at this time which version came first. 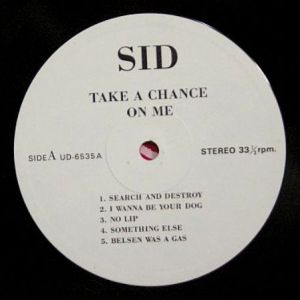 This was only the second Sid Vicious bootleg ever. The first one being the USA release Sid Vicious Live (Creative Artistry Inc. JSR 21;  rel. early 1980), which presented the very same material. The UD release supposedly has the sonic edge over the U.S. title..

Side 1: Search and destroy / I wanna be your dog / No lip / Something else/ Belsen was a gas

The following track listing and times come from the Sid Vicious Live LP:

Nothing from this date was included on the official Sid Sings LP. 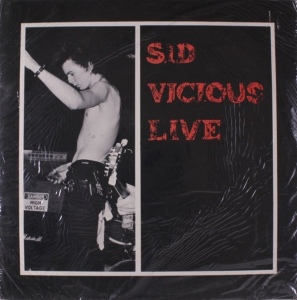 A 1980’s U.S. poor quality reissue with white labels. Probably a reissue of the Live LP shown above due to the matrix # (JSR 21). 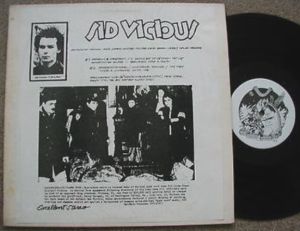 The second pressing of the reissue, no mentioning of Innocent Records on the insert.

The idea of the “Viicious Burger” came from the Pistol’s art director Jamie Reid – probably inspired by a photo of Sid eating, Bob Gruen took during their U.S. tour; first used in June 1979 for the ‘CMon Everybody’ Sex Pistols 45.

Jamie Reid’s is most famous for jis cut-and-paste ransom note designs.  Influenced by radical politics he was exposed to while at art college in Croydon, he took to the ideas of the avant-garde political group, the Situationist International. One of his fellow students happened to be none other than Malcolm McLaren – and the rest is history.

Buttons, T-shirts and coffee mugs with this logo exist as well – punk had gone ‘full commercial’. 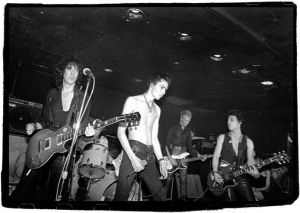 Whenever I’m in New York and I walk by this ‘Goth castle’ on 23rd St. , I don’t think of Bod Dylan or Dylan Thomas or Thomas Wolfe (or … ) I think of the ‘king and queen of self destruction’: Sid & Nancy in room 100 on the “junkie floor”. The room was removed/converted soon after the tragic incident, after mourners and fans sneaked into the building and left flowers at the door step and owner Stanley Bard apparently was not keen on having a punk rock shrine inside the hotel.