After TWENTY/TWENTY HINDSIGHT (on TAKRL) there was RETROSPECTIVE FORESIGHT 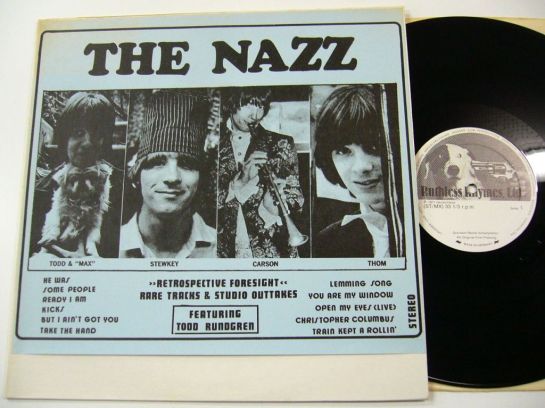 Who actually plays on these tracks seems to be a bit in dispute:

“… it has been reported that the live numbers that were used here weren’t even recorded by the Nazz but by the Sickman of Europe, a group that I guess (correct me if I’m wrong, gently!) featured not only former Nazz member Thom Mooney but future Cheap Trick Rick Nielsen amongst perhaps others Tricksters (I believe Tom Petterson was in there as well).  The weird thing about the Sickman of Europe name is that it was used in the eighties after Cheap Trick’s fame had eventually deep-sixed and Petterson and perhaps Nielsen dug it up for a go ’round in a new combo which I doubt had the rest of the original members.  The data regarding this group is still sketchy and I’m sure adds to the confusion for anyone doing a Pete Frame-styled family tree. Even more puzzling for me is why would two guys who were in a major league rock group have to start from the bottom only a few short years later playing the club circuit in hope of another big chance in the limelight?  I guess this music biz is a lot tougher than I had imagined! If you do want to hear the Sickman of Europe in their original state they might actually be on here and if that is them then they sure were as hard-edged pop rock good as the band they eventually morphed into! (I didn’t want to bring this up since it would only add to more confusion, but the Mooney-era Sickman used to bill themselves as the Nazz whenever they’d hit Philly which is perhaps why they are on this album to begin with. I’m sure that the bootleggers themselves weren’t too sure either, and who knows even at this late date which is what!).” [http://black2com.blogspot.de/2009/11/only-thing-missing-is-incense-used-to.html]

“… As Sick Man of Europe, they recorded a number of demos which have since turned up on a bootleg album, Retrospective Foresight, as a collection of Nazz out-takes, although most of the tracks actually aren’t. It actually features Nazz III tracks, a live take of “Open My Eyes” that Stewkey thinks might be the Texan Nazz, and rough takes of “Lemming Song” and “Train Kept a ‘Rollin’.” The Sick Man of Europe tunes on the record are “I Ain’t Got You” (a Stewkey original), “He Was” (another Stewkey comp), and Nielsen’s “So Good to See You” (billed there as “Ready I Am”).”

“Here’s one of those few boots you’d see that was actually comprised of tracks from legitimate albums, some which just might have been in print by the time these obvious homages came out! However, in this case the platters which make up the contents of this ‘un were long gone, and since the Nazz were considered a cult group with one famous member who was chopping the seventies charts then why not do a bootleg “Greatest Hits” collection anyway since the Nazz’s legit company certainly weren’t in the position to??? I mean, if Trademark of Quality could take selections from the two Lothar and the Hand People platters and release ’em under the title SPORES then Korneyfone had every right to give Nazz the same royal under-the-counter treatment so-to-squawk. So unlike RETROSPECTIVE FORESIGHT  which featured previously unreleased Nazz gems TWENTY/TWENTY HINDSIGHT’s nothing but previously-released nuggets which sure came in handy especially at a time when the legit albums were all but impossible to latch onto unless you were willing to pay $12 a pop via some TROUSER PRESS auction.

Speaking of NUGGETS (well, I always seem to be some time or another!), I know that quite a few of you reg’lar readers wince at the thought of Nazz’s inclusion in that classic collection of sixties-era punk rock. In fact, a few have even questioned if the Nazz were indeed punks at all which I gotta say is a fair enough question considering how their sound seemed too late for the ’64-’66 days yet out of touch with what was passing for late-sixties punkisms. Well, the way I figure it is if those critics at CREEM could get away with callin’ acts like Asheton Gardner and Dyke as well as Ten Years After punk rockers, and fanzine luminaries could make statements about Mike Heron’s SMILING MEN WITH BAD REPUTATIONS or Aerosmith as well as ex-Nazz hisself  Todd Rundgren’s very own SOMETHING ANYTHING being punk rock, then Nazz sure as shootin’ are punks too!

At least TWENTY/TWENTY HINDSIGHT’s got a good selection of Nazzian snazz to it as well as their more hard rock moments that tend to snooze ya even more’n a George Harrison slide guitar solo. Naturally “Open My Eyes” and “Hello It’s Me” are here as well as that strange “Tighten Up” spoof, and even if the rest doesn’t live up to your own late-sixties punk standards the selection might just be a better bet’n having to wade through all three legitimate albums just to get to what I assume are the best parts.” 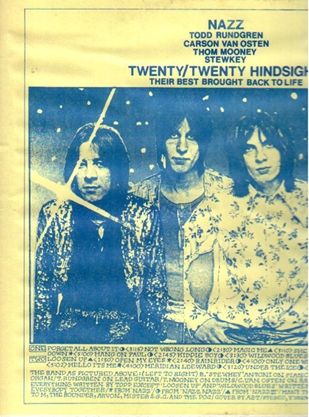