A copy of this European bootleg: 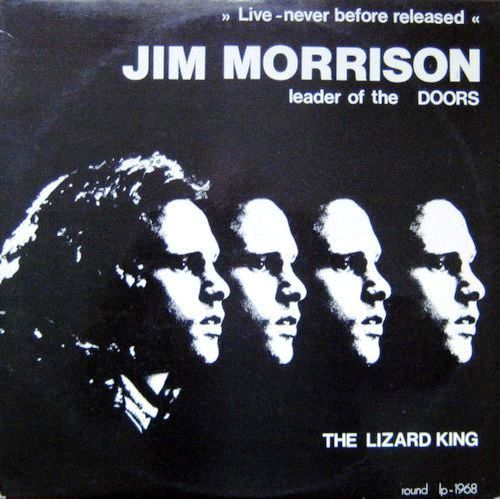 From a reviewer: “I’m glad to own this mega rare live bootleg. It contains some fine performances of their classic songs. This was recorded in London in 1968. The weakest thing in this record is the somewhat poor sound quality. That’s the reason why I don’t give five stars for this one.”

Later copied & released on the Wizardo label as well: 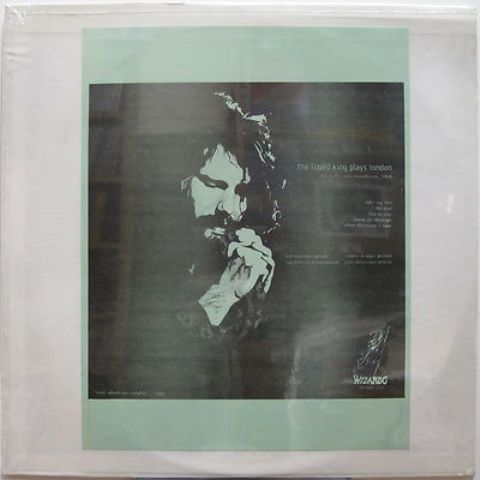 Three shows (of 4) from their legendary European opening two-night stand at the Roundhouse on September 6 & 7, 1968

Although the shows were filmed, surprisingly the only material released is only from the Sept 7 late show (Granada Television for the British television program The Doors Are Open) but that’s completely another (soundboard) recording – which here is audience and moreover, unedited.

According to the cover its dated to Sept 8th but after comparing 3 songs It became appearent its the SBD source of the second show on the 6th.
Also the tracks here are in varied order. See the audience version for the proper setlist.

Portions of the Roundhouse sets are available on the DVD’s “The Doors: The Doors
Are Open – The Roundhouse, London (1968)” and “The Doors – Live in Europe 1968”

The Doors supposedly had performed a better show during this night than the first set on the previous night. In a review by Mike Grant of Rave magazine, Morrison was quoted as saying , “They were one of the best audiences we’ve ever had. Everyone seemed to take it easy. It was like going back to the roots again and it stimulated us to give a good performance. They were fantastic. That’s all I can say. ’Cept that we enjoyed playing at the Roundhouse more than any other date for years.”
John Tobler, writer for an English magazine Zig Zag, had caught The Doors on their fourth set and was really impressed with their performance. Almost two years later, John had interviewed Jim at the Isle of Wight Music Festival on August 30, 1970 where Jim had said: “That was, I think that was one of the best concerts I’ve ever done.”
Unfortunately only five songs seemed to have survived from this concert, however the sound quality of this recording is a bit better than the opening show at The Roundhouse on the previous night.

“Five To One” from this show was included on “Boot Yer Butt!: The Doors Bootlegs” (a four-disc box
set released by Rhino/Elektra Records)

According to the cover, the first six songs are from this show but it’s just a lie. Only the first track might be valid for this date. All the others following are undeniably SBD sources and in that case coming from a released, forbidden source just like track 5, ‘The End’ which is actually from the July 5, 1968 Holywood Bowl show.

The Doors were in New York for a few days before flying to London on September 5. Jim called Pamela and asked her to be with him. She parked her Jaguar XKE at a one-hour meter at LAX and flew to JFK. the cops towed the car the following day and found a pound of high-test marijuana in the trunk. Pam was arrested when she tried to claim the car a few days later, but Max Fink (Jim’s attorney) somehow got her off.

The Doors’ 1968 European tour was a considerable triumph. It had to be, cause the European kids were waiting ofr them. The London music paper Melody Maker was beating the drums: “Look out, England! Jim Morrison is coming to get you….Like Jagger and the Stones, Jim Morrison comes on like a fifties-style rock idol in skinthight leather trousers, but is a actually a poet of some stature….His audiences know he isn’t kidding.”

The Doors responded to this adulation. Almost every show and broadcast was very good, confirming their European reputation as America’s coolest band. The brief tour was a testament to what Jim Morrison could still do – if he really wanted to. As it turned out, these shows also marked the end of the Doors, originally conceived. Soon, at Jim’s insistence, they would mutate into another kind of group altogether.

They flew to London via Air India on September 2, 1968. The Granada TV crew met them at Heathrow Airport and filmed them as they emerged from customs. On September 5 the Doors performed “Hello, I Love You” on the BBC’s Top Of The Pops TV broadcast. The next day, Friday, September 6, the Doors played the first of their two legendary nights at the Roundhouse, and old, acoustically challenged former railway barn in Chalk Farm.

The early show went off well, but the late show was a killer. Originally scheduled to begin at ten-thirty, it was delayed by the Airplane’s (stunning) two-and-a-half-hour set and didn’t start until after one in the morning. Many of England’s pop aristocrats were there: Paul McCartney, George Harrison, Mick Jagger, Keith Richards, Cream, Traffic, and movie stars Terrence Stamp and Julie Christie. As the Granada crew filmed every song, Jim performed with a contained passion and an animal grace that surprised even the other Doors and the their crew. They began with a deadly “Five To One” and tore through seventeen songs. “The Unknown Soldier” was rapturously received by the long-haired young crowd, since the English were generally against the American presence in Vietnam. Jim cut “Crawlin’ King Snake” into “Back Door Man,” then took the band through an abridged but dramatic “Celebration Of The Lizard” that brought down the house. After “Hello, I Love You,” they went into “Moonlight Drive,” during which Jim recited “Horse Latitudes.” After a howling ovation, the Doors came back and jammed on “Money” until the gray London September dawn suddenly broke through the Roundhouse’s glass skylights, an epiphany for everyone present.

After a few hours rest, the Doors held an afternoon press conference at London’s Institute for Contemporary Art, where Jim thoughtfully fielded questions and deflected political criticism by saying that songs like “Unknown Soldier” spoke for themselves. Densmore: “Jim dazzled the reporters with his rhetoric. He controlled the conversation with long pauses between sentences while he weighed his answers. You could see the wheels turning as he took the maximum time tolerable before responding.

When a riporter aksed about comparisons with Mick Jagger, Jim answered: “I’ve always thought comparisons were useless and ugly. It’s a shortcut to thinking.” Another asked about fans coming to him for advice. “I get incredible letters,” Jim said, warming to the subject. “But they teach me how to live rather than me teaching them. My fans are intelligent youngsters. Very sensitive people.”

That night they again played two shows at the Roundhouse. the Airplane, the English rock singer Terry Reid, and the Crazy World of Arthur Brown played first. Robby Krieger had gotten over his jet lag and treated the audience to a psychedelic guitar display that burned with fire and originality. The second show again finished at dawn with a half-hour reading of “the End,” during which the crowd sat quietly transfixed, as if they were attending a solemn rite.

Jim later said this second Roundhouse show was the Doors’ zenith performance. He told New Musical Express, “The audience was one of the best I’ve ever have. In the States, they’re there to enjoy themselves as much as they came to hear you. But at the Roundhouse, they were there to listen. It was like going back to the roots. It stimulated us. They took me by surprise, because I expected them to be little resistant, a little reserved. We’d been cautioned there might be hostility toward an American group. But they were fantastic, is all I can say. It was probably the most informed, receptive audience I’ve ever seen in my life. I think I enjoyed the Roundhouse more than any other date for years.” 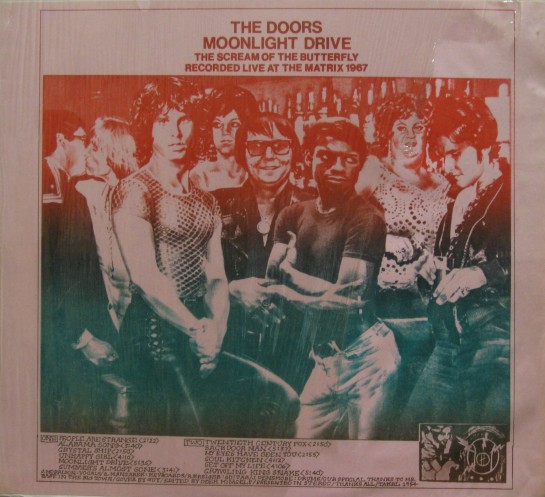 This cover was “borrowed” from an image in the 1974 art book “Rock Dreams” by Guy Peellaert & Nik Cohn. I hope they were pleased.

Source: Live at the Matrix in San Francisco, 1976

“Arguably the most famous (and valuable) professionally recorded live document left behind by the Doors, the Matrix live recordings from March of 1967 have appeared in numerous different bootleg versions, including (for those with long memories) some woefully inadequate vinyl editions from the late ’70s and early ’80s.”