“This is a typical club recording, only the mics are plugged into the soundboard. One channel is missing some highs but this is how I got the tape. The singing is a bit rough, but it is Spirit!!

Around 1979, I finally tracked down one of the guys who ran the soundboard at the Boston Tea Party (after running ads in local papers and getting various responses). After about 10 months and a few dozen phone calls he finally said ‘common over’. Very nice guy still living in the Boston Area. He told me later that he was afraid I was the IRS looking for back taxes from when he worked at the Tea Party. He gave me a few soundboards he had kept and some names to look up. This show is one of them.”

There are a few level fluctuations as well as a little over modulation.”

A copy of the soundboard recording must have made its way over to Italy prior to 1982.

“The performance is strong but sound quality is poor.”

“I have heard a bootleg of the “Spirit”, October 1969 show, and it is awesome. Unfortunately, the sound quality of the tape was bad, but you could tell that it was a rocking night. “

This bootleg earned an ‘Exm’ rating in HW. 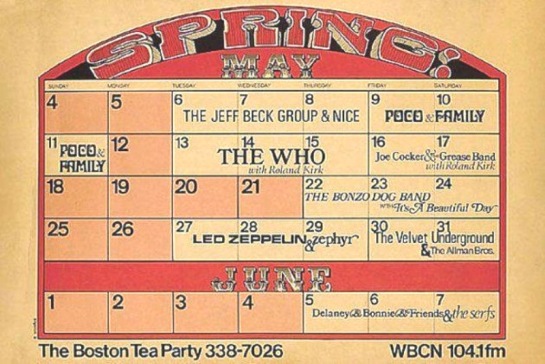