Source mislabeled and corrected already in Hot Wacks to “Cleveland [Agora], March [22nd according to an Iggy Pop bootleg site but maybe from 21st after all, the date used by wolfgangsvault] ’77”. Rated “Exs” – FM source.

Some of these tracks would surface on Iggy’s official TV Eye Live 1977 album released in 1978, so Iggy could close out his contract with RCA without having to deliver another studio album.

Review from allmusic.com: “While Iggy Pop’s first two solo albums earned plenty of press (thanks in part to the participation of David Bowie), they didn’t sell especially well, and in 1978 RCA Records offered Iggy a fast and painless way to deliver the third and final album on his contract — they proposed he make a live album, and gave him a $90,000 budget for the project. Figuring this might be his last paycheck from a record label for a while, Iggy assembled soundboard tapes from three dates on his 1977 tour, spent $5,000 doctoring them at a studio in Berlin, and pocketed the rest. This may have been a shrewd move fiscally, but it didn’t make for much of an album; TV Eye (1977 Live) sounds murky and hollow, with the four cuts from an October date in Kansas City sounding especially muddy, though with appropriate irony the K.C. performance sounds livelier than the selections from late March gigs in Cleveland and Chicago. (The more staid Cleveland and Chicago cuts feature one David Bowie on keyboards, while for the later show he was replaced by former Stooge-for-a-day Scott Thurston.) While sonically this is a step or two up from a typical bootleg, from a performance standpoint this isn’t material anyone would risk a jail sentence to release; while “I Got a Right” and “Lust For Life” sound potent, on the rest of the cuts whatever energy Iggy generated on stage didn’t make it onto tape, and the versions of “TV Eye” and “I Wanna Be Your Dog” make clear that Iggy’s road band sure weren’t the Stooges. For obsessives and completists only — but given the huge glut of semi-authorized Iggy Pop albums floating around, there must be an awful lot of them.”

An extended version of the Cleveland ’77 set would see another release about two years later on Suck On This (see below).

The given date or location may be incorrect based on the above tour date listing.

From a reviewer: “Personally I would rate this as the highest audio quality after the Chicago FM recordings, judging by other recordings I have heard from this tour, it is not surprising the recording made it to bootleg.” 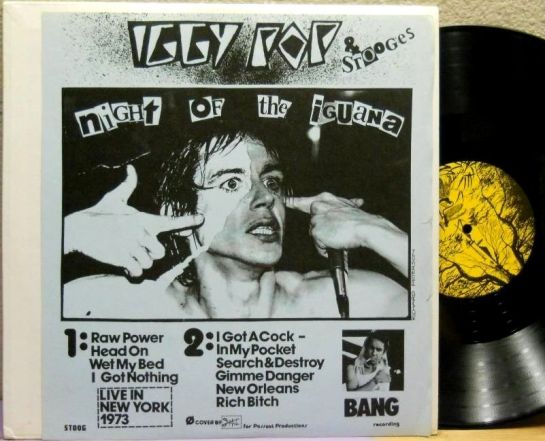 Audience recording from the Academy of Music in New York on New Year’s Eve 1973, which featured a line up of BLUE OYSTER CULT – IGGY & THE STOOGES – TEENAGE LUST and KISS. One of the few bootleg covers with a photographer credit. 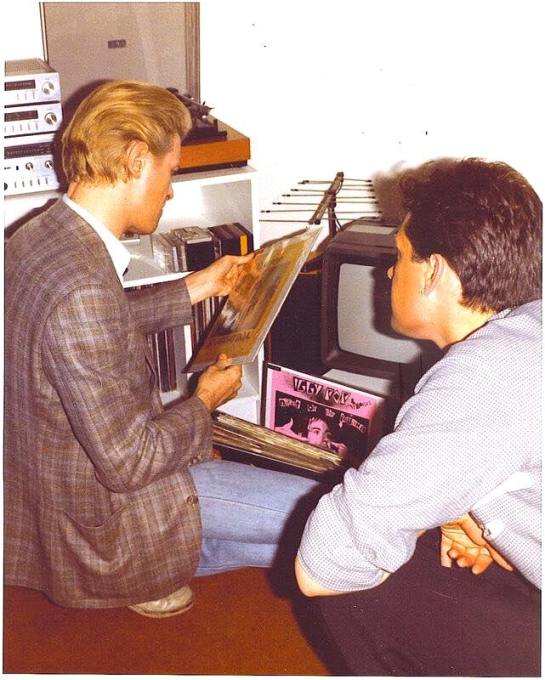 The NYE ’73 material has since been officially released by Bomp records in 2000 as Double Danger. Here is a review of that release:

This review is from: Double Danger (Audio CD)

“What you get with this release is yet another batch of live recordings – this time around culled from two gigs performed by Iggy and the band in Baltimore and New York in late 1973. That alone should sound the alarm with anybody who knows the career-profile of the Stooges. Here they are at the end of what can only be described as their nose-dive into disintegration from drugs, violence and booze – as the extensive liner notes calls them: “a train wreck.” And both gigs are performed accordingly, with the result for a number of excellent reasons being kept un-released up to this point.

The New York gig sounds infinitely better – although in this context that is NOT saying much. Taped on New Years eve the band sounds in a vaguely party-like mood, but by the fifth song – Cock In My Pocket, things nevertheless start to fall apart, and some discerning members of the audience yell “Go Home!” at them – with every right I might add. Iggy & the band must have heard the heckling, because they thunder into the first memorable performance on the version of Search & Destroy that follows.

Rather than sanctioning the release of this drivel one wishes that Iggy would “do a Zappa”, and master the release of some of the memorable bootlegs floating around from the period – notably “Suck On This” for instance. releases like this will leave even diehard fans like myself feeling cheated. If you’ve got to have everything available spend your money, if not look elsewhere – I kind of wish I had…”

On the other hand, another reviewer quite liked it: “Disc two is of a shorter set when the band played New York City on that New Year’s Eve,while opening for Blue Oyster Cult and Kiss(apparently their first ever show). My only regret is that I wasn’t there.Both shows were in fact mastered off an audience recording.Don’t worry,though.The sound quality,is actually quite adequate.A must for all true fans of classic punk.”

Ca. 1979, Vicki Vinyl released another Pop/Bowie album, the double Suck On This 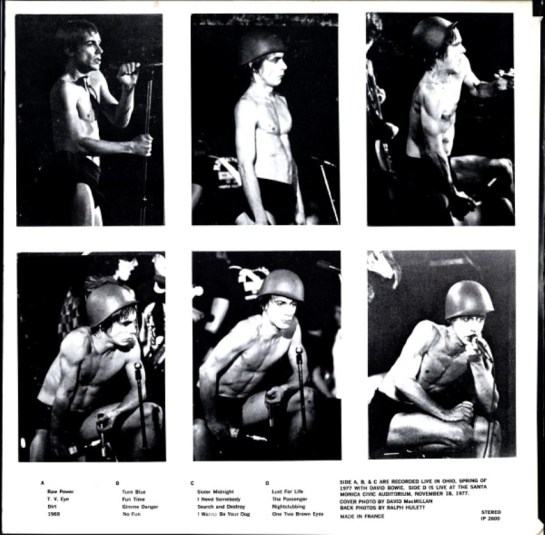 A collector’s comment: “I’ve long enjoyed the 21/22.3.77 concert from the Agora Ballroom, at first from a tape of the “Suck on This” bootleg LP, and the “Rock Around The World” broadcast LP [see below]. For the uninitiated, it’s a concert Iggy did on his spring 1977 tour, including Bowie on keyboards and Hunt and Tony Sales (later of Tin Machine) on bass and drums, and Ricky Gardiner (who co-wrote The Passenger) on guitar.

The Suck on This bootleg was surpassed over a decade ago, with the authorized release of the concert on CD.

However, it always irked me that the start of the Gimme Danger keyboard solo – a beautiful and haunting one, played by Bowie – was edited, on each CD release. I have closely compared all versions of this concert and it seems the same take of this song is on each (despite the two dates listed, apparently only a different take of “Dirt” has emerged, the one on the “TV Eye Live” album). The edit out the start of the solo seems to have been done to partly mask a little tape damage. A needless edit…particularly as nowadays a minor repair in Audacity could do a much a better job of masking the minor dropout (reduction in high pass, to reduce the muddiness that creeps in for a few seconds, a minor volume increase…any of which, or simply leaving the song as is are preferable to the edit).”

Comments about the Santa Monica Civic recording: “Iggy sounds worryingly unhinged at the start of this…but the band rock!  It’s an unusual performance even by Iggy’s standards, he does really sound on the edge of sanity at times, rather than the ‘normal’ ranting or tantrums. However the audio quality is very high, towards mixing desk standards…it’s not dissimilar to the Paris 23 Sep 77 recording, an officially released show which seems to be a mixing desk recording albeit with less clear stereo separation than this one perhaps.

It also mentions in the back of Per’s book that Neighbourhood Threat from this show was featured on the various artists (bootleg) LP, ” Whitman’s Punk Sampler”. 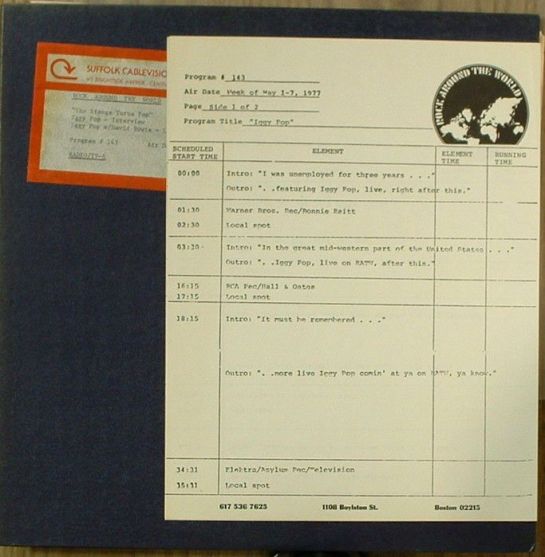 Live tracks mixed with an interview recorded in April of 1977. If anyone knows which songs they selected, let me know.