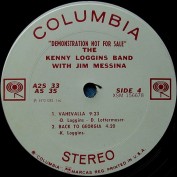 Notes from a vinyl to digital restoration project:

This is a fabulous sounding set from the early days of Loggins and Messina. This
is a brand-new transfer from an upgraded pressing of this show, and there is a
significant increase in the sound quality. The instrumentation is now sparkling
clear and up-front, and the reverb on the solo section is more in the forefront.
Please remember this is an FM recording from 35 years ago, and adjust your
sights accordingly!

Whenever I see another copy of a very rare album such as this one, I try to pick
it up. To my surprise, this pressing on R.S. Records (Highway-HiFi) turned out
to be the original, and the Phonygraf version used previously was a copy. There
is a sharp drop in surface noise, the insert glued to the front is a bit bigger,
and this pressing has the original labels. 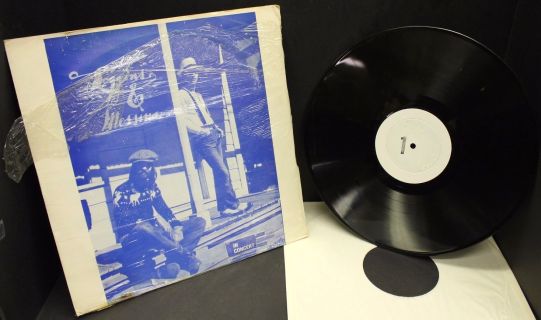 The original bootleg obviously wanted to ride the coat tails of the hit single off of Loggins and Messina’s 2nd album – a # 4 on Billboard Pop Charts. The 45 was released in November of 1972 and reached its peak in early 1973.

Bob Dylan re-releases that have been spotted with Phonygraf labels:

Originally released in 1973 on the classic TMOQ label (Matrix: BD 524 / 1862), it’s re-release didn’t just limit itself to one label but went the whole hog. bobsboots.com: “There was a new insert with pics of 13 CBS LPs Vinyl was clear yellow, orange, or red. LP labels were blank, Phonygraf, original pig, or smoking pig. Jackets were white or yellow. Several combinations of the above exist, as well as combinations from the original packages. Matrix: 1862 A/B” 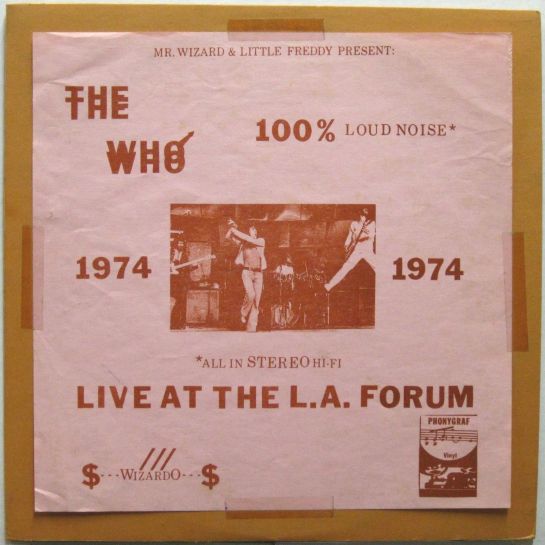 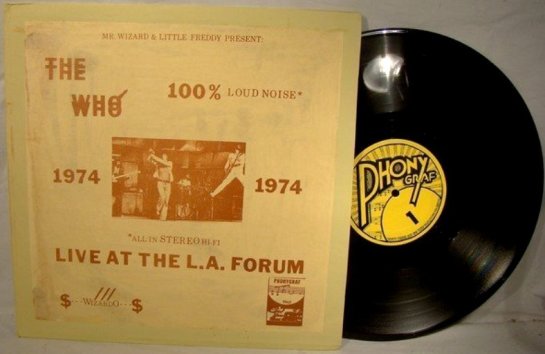 “This was recorded on Thanksgiving Day, the 1st of 2 nights at The Forum and the 2nd night in the U.S. premiering Quadrophenia to North American audiences on the 1973 tour. Interesting to hear a performance of the short-lived “Helpless Dancer” which was one of the songs the band later abandoned because of the many problems with out-of-sync backing tapes and frequent guitar changes.”

This recording was released under several different titles: Live At LA Forum (No label info available) [double album with more studio tracks on side 3 & 4] 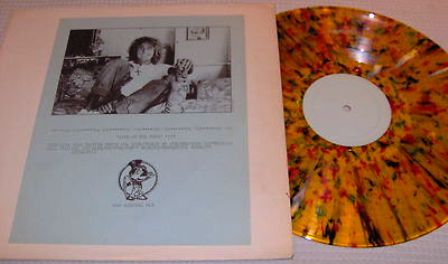 If Hot Wacks is correct, the Pigs Eye/K&S versions have superior sound compared to Phonygraf. I believe that one of these boots was used for the soundtrack for this silent Super 8 movie (until 8 minutes and 28 seconds):

Complete Concert Set list:
I Can’t Explain, Summertime Blues, My Wife, My Generation, I Am The Sea, The Real Me, The Punk And The Godfather, I’m One, Helpless Dancer, 5.15, Sea And Sand, Drowned, Bell Boy, Doctor Jimmy, Love Reign O’er Me, Won’t Get Fooled Again, Pinball Wizard, See Me Feel Me, My Generation, Let’s See Action, Magic Bus, Naked Eye, Baby Don’t You Do It

“L.A. Forum, 22 November 1973, 9th row. The concerts were on a Thursday and Friday. Thursday was Thanksgiving, and my friend and I went to this concert. It was pouring rain outside. Opening act was Lynyrd Skynyrd. There was an encore – Baby Don’t You Do It. At the end, Townsend smashed his guitar. L.A. Forum, 23 November 1973, front row. I recall the concert was virtually the same as the preceding night, but no encore.”

Keith was in better form for the LA shows and the group treated the first-night crowd to a rare event at a Who concert when they came back for an encore of ‘Baby Don’t You Do It’. Pete also smashed one of his numbered Gibson Les Paul Deluxe guitars. Chris Charlesworth reported in Melody Maker (December 8): “19,500 fans had stomped and cheered for over 15 minutes in the Forum, refusing to leave even though the house lights had been raised and probably well aware that The Who rarely do encores. But tonight their enthusiasm was rewarded with just that. The group came back and did an encore – actually ‘Baby Don’t You Do It’ – only the second time I’ve seen this happen in watching The Who around 20 times… they blasted through the song, climaxing with Townshend unstrapping the Gibson and, gripping the fretboard as if it were an axe, bringing it down on to the stage with a resounding crash time and time again until it cracked around the 12th fret.” 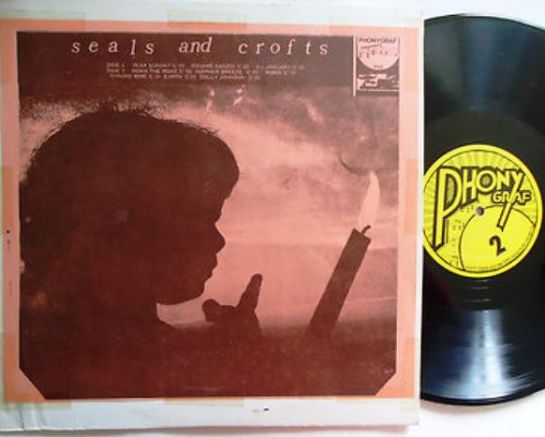 I wonder what “FIRST IN A NEW SERIES” was referring to.

From the faq page at sealsandcrofts.com: “Then there is the so-called Peace Concert, circa early 1972 at an unknown location. This bootleg is a copy of the only 70’s vinyl bootleg of S&C, which features the silhouette of a child holding a flower on the cover.“

Audience recording from Chapman College Memorial Hall, Orange Ca  Nov 16 1972 that in its acoustic glory is no match for the noisy vinyl.

Phonygraf numbers: 1112: Mahavishnu Orchestra ‘Dance Of The Maya’; 1113: Elton John ‘In Disguise’; 1115: The Beatles ‘EMI Outtakes’ and 2101: ELP ‘Celestial Doggie’ have all been featured before under their respective artist sections.

This is an audience recording in great stereo. Recorded at Long Beach, CA Nov. 10, 1974. The 1st & 5th song on side one are slightly clipped. Tracks 1-5 make up side one and the rest is side 2. You can also read an interview with the guy who taped this show in the book “Black Market Beatles”.

Most importantly, the source for this decent recording never appeared and all CD versions were taken from a vinyl copy of this LP. 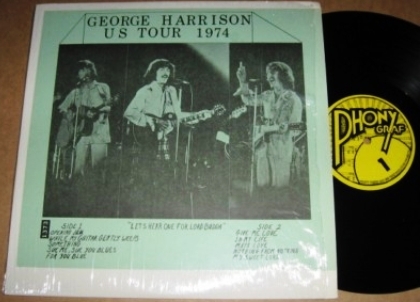 There are at least two cover variations. Most have the number “1373” surrounded by a black print block to the immediate left of the side one track listing, while this is absent in the first image. 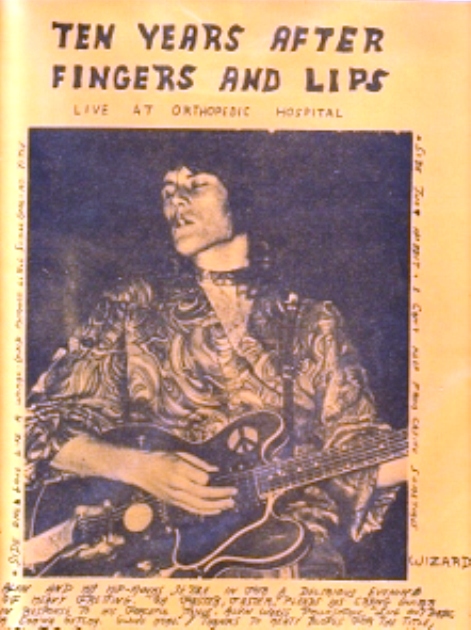 Source & Venue: Unknown but based on my research this could be from a radio broadcast from the Fillmore East on February 27, 1970 as available on wolfgangsvault:

Notes from the needledropper ‘Doinker’ [and many thanks for his audio preservation work]:

“If there ever was a bootleg show that I could take to the grave with me, it would be this one. Musically, it’s that important to me.

This music is perfect for listening to at 3am when you don’t know where or what you are anymore. Complex, inward harmonies blend with haunting sax and striking vocals. And, don’t forget the social consciousness thrown in for good measure!

The sides were reversed and blended for this torrent as it’s out of sequence on the vinyl. The setlist listed on the vinyl goes like this:

In fact there are a couple of mistakes here. “The City” was played at this show as an encore, “Mourning” is in fact “The Sausalito Bay Suite”, and there is another track after “The City” that I can’t identify. The fact that “TSBS” is cut at the point where it is, is a wound deep enough that I can’t heal it. You just have to take the fact that there’s almost 12 minutes of this piece, and leave it like that. I can’t tell you how much it would mean to me if you have this song in its entirety from this show.

After retracking and properly identifying these songs, I come up with this set list. 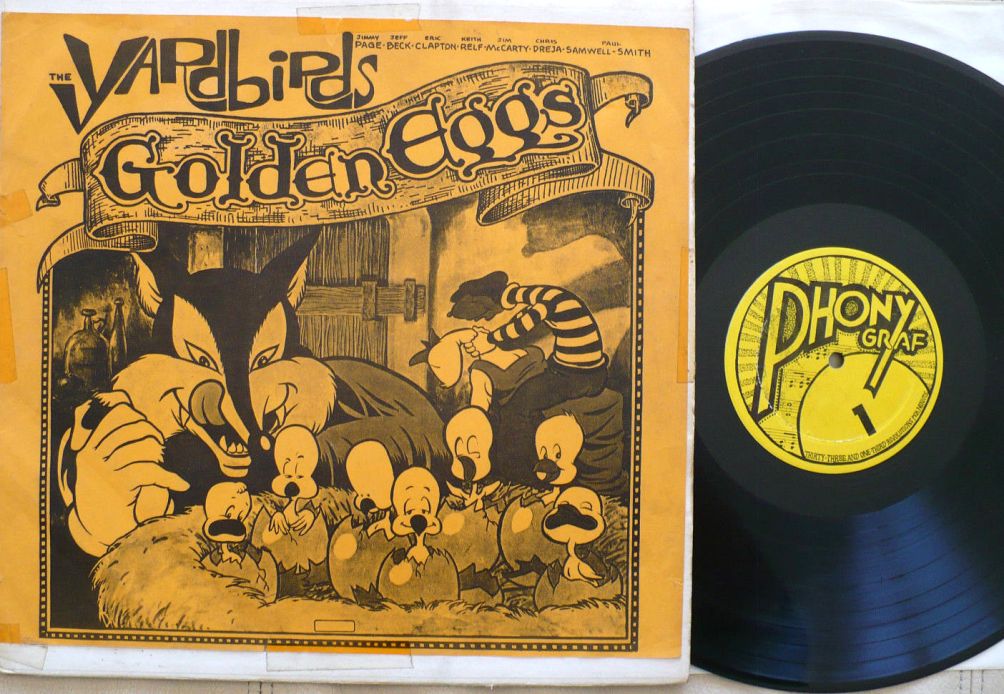 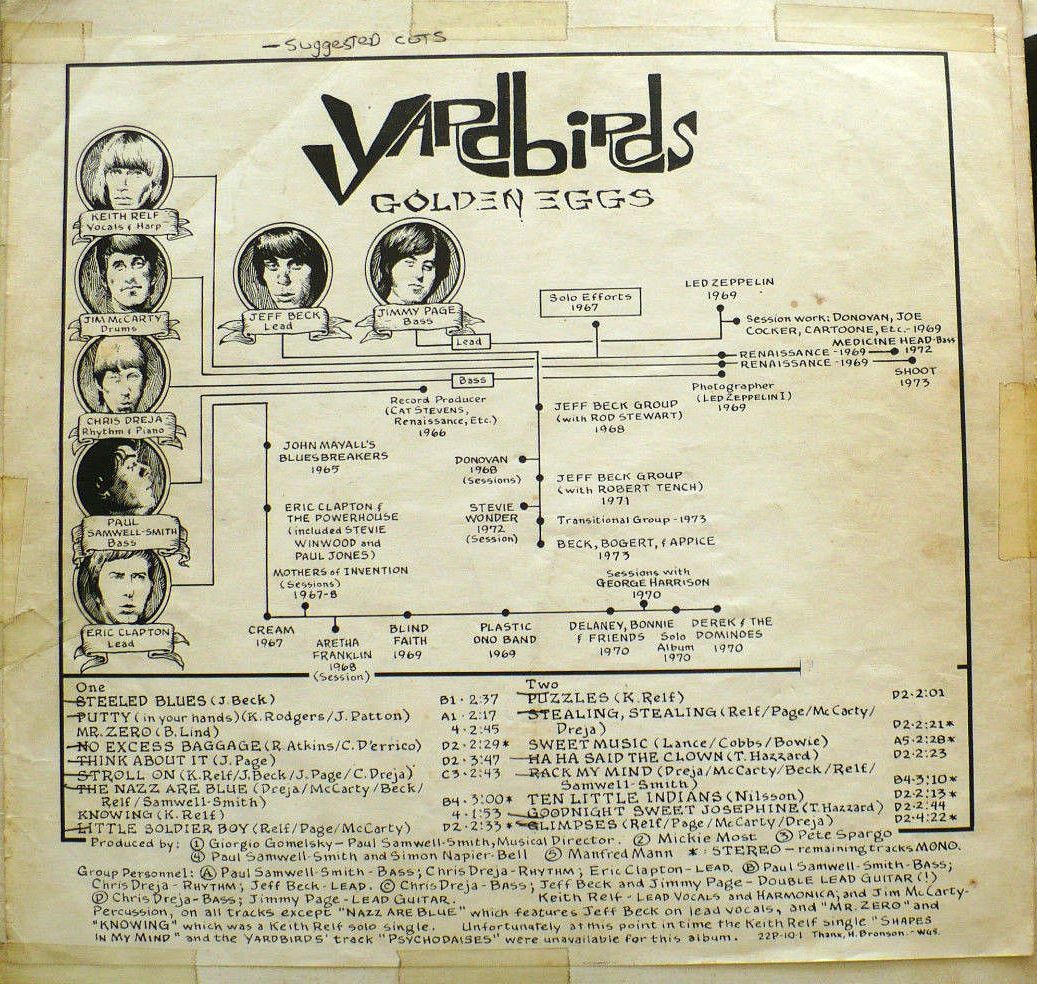 With a little help from John Wizardo, I am guessing.

Quality rating: ‘Gs’ and a notch below that for the King Kong/CBM release shown here:

Mushroom reissues on colored vinyl – better artwork but why show the Rolling Stones, when they are not even featured on the album? 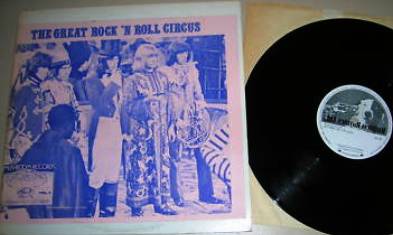