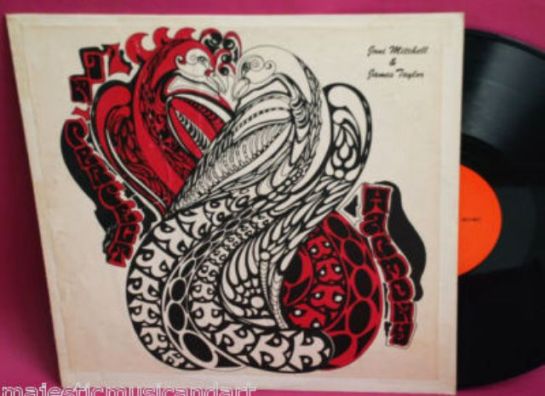 HOTWACKS separates this release into IN PERFECT HARMONY on Escargot Records and TAKES TWO TO TANGO on Smilin’ Ears. I assume they went by the spine writing for the Smilin’ Ears version. It does seem as if several producers might have had their finger in the pie here and produced several different versions, based on the variations I managed to locate (with help, t.y, Karl), I am still looking for more images (printed spine, back, label variations, upgrades). 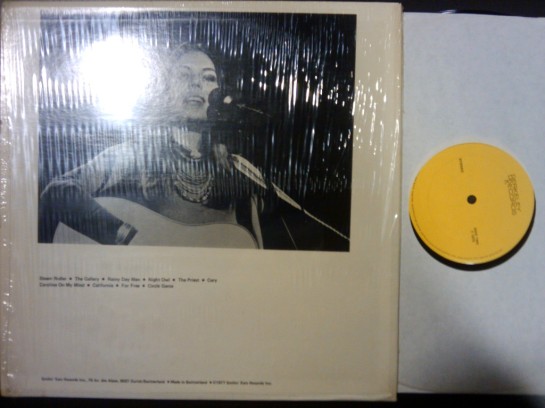 This recording is usually attributed as having been recorded at the Royal Albert Hall but is a John Peel session recorded live in front of a studio audience at the BBC’s Paris Theater in London.

“This one is a bit of a mystery to me. I have a DVD of James Taylor‘s appearance on BBC TV and I can tell you that the songs he sings solo on this recording are from the same recording as that DVD…exact same spoken intros, same improvised lyrics, etc. However, the DVD looks like it was recorded in a TV studio in front of a small audience, not in a venue the size of the Royal Albert Hall…“

“The title of this bootleg is misleading. While Joni Mitchell did indeed perform at the Royal Festival Hall, London in 1970 the tracks on this bootleg were actually recorded by the BBC at the Paris Theatre shortly after her appearance at The Isle Of Wight Music Festival. The concert, including James Taylor’s solo songs, was broadcast in December 1970 as John Peel’s Sunday Concert on BBC’s Radio One.“

Excerpts from this broadcast were first bootlegged ca. 1976 on the TAKRL (1949) release (Kept On) By Her Own Devices

A reader added the following information – thank you.  “This is taken mostly from live recordings at the Second Fret Club, Philadelphia, 1966 and 1967, plus a few from WHAT studios, Philadelphia, again 1967 and (if I recall correctly only Sugar Mountain) from 1966.”

“According to Joni Mitchell’s official site the bulk of this material is from a bbc2 TV program called ‘Sounds for Saturday’ and the date given is May 19 ’72 (either recording or broadcast date). Tracks 5, 6, 7 & 8 are from an ‘In Concert’ radio show ,also on the BBC, from the Paris Theatre London on October 29 ’70 and often erroneously referred to as from ‘the Albert Hall’.”

You can listen to the album here: http://www.mocm.ca/Music/Title.aspx?TitleId=318273 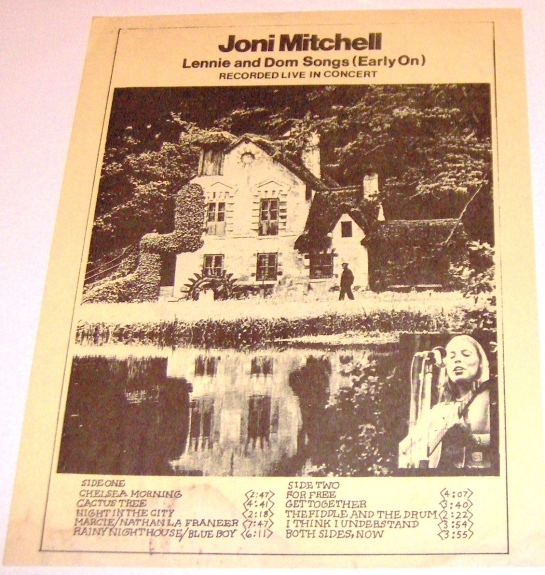 “The second of the Phonograph-to-Kornyfone reclamations. This time we found two previously withheld outtakes to add on. The first Joni underground in its original form. HW’s information about this projects origins are entirely fictitious.”

Possibly a copy of this bootleg on Midnite Records:

Source is given as “NET TV broadcast from LA 1969”; I do not see any added outtakes.

“Early Joni Mitchell bootlegs are pretty thin on the ground; from the sounds of things, this one was recorded live around 1970. It’s not remarkably different from her studio takes, except that all of the songs are performed solo, on guitar and piano. A good cross-section of material from her early LPs, including “Chelsea Morning,” “Marcie,” “Night in the City,” and “Both Sides Now.” Almost an hour in length, too, neat bonuses including a cover of “Get Together,” and what sounds like a studio version of “Urge for Going,” probably her best-loved song that was not included, for whatever reason, on her first albums.”