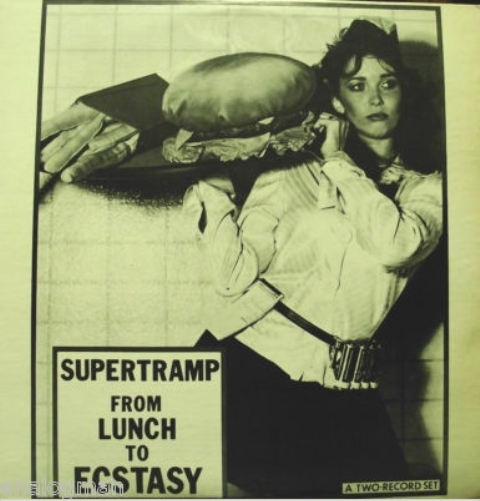 Interesting how bootleg labels can give accurate information regarding the date and venue when they want to, as in this case. 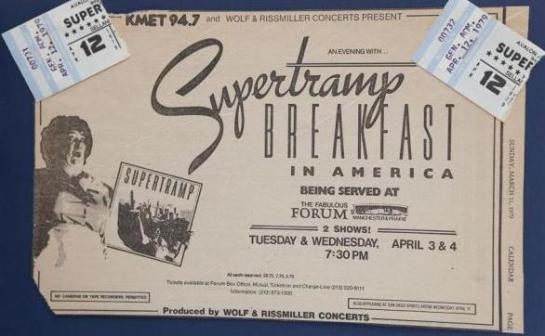 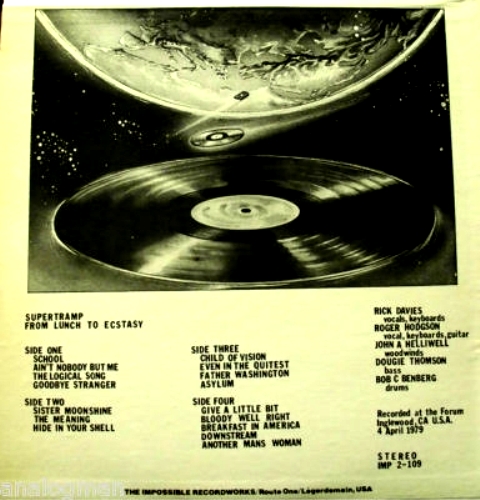 All tour dates can be found here: 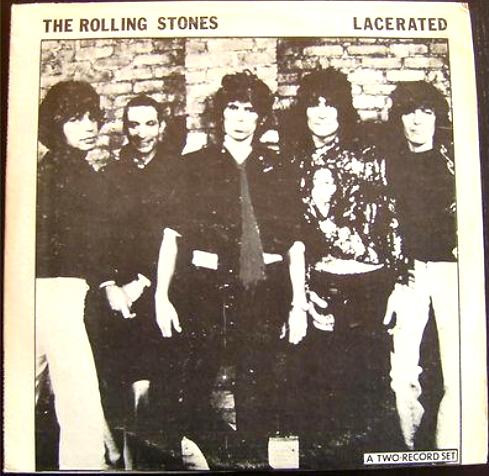 [11 songs from Memphis and 16 from the Detroit show can be listened to on the wolfgangsvault.com website.] 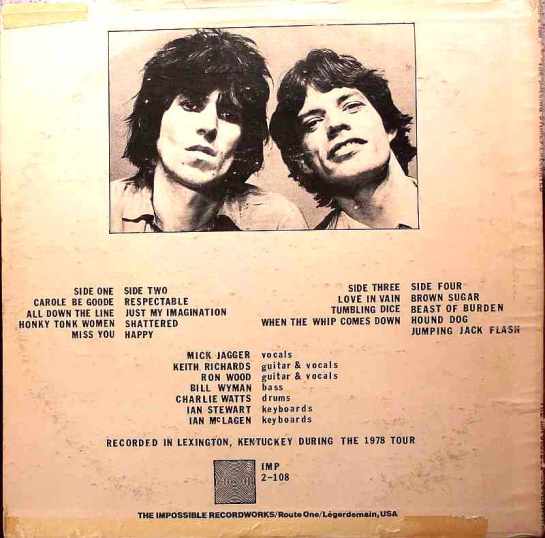 The re-release on Saturated Recordworks using the same color cover as the Slipped Disc title that had tracks from Memphis and Passaic, NJ: 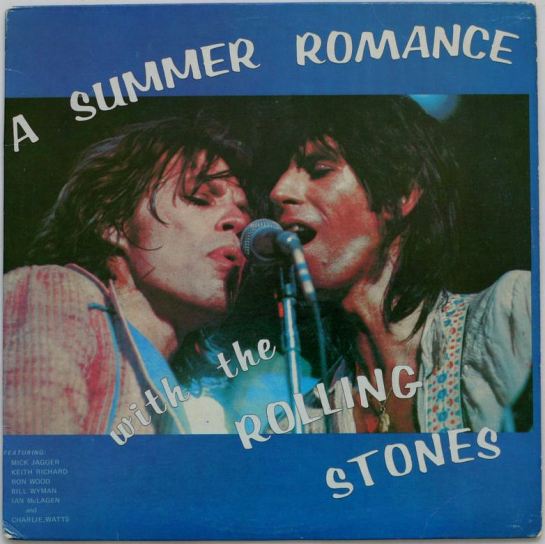 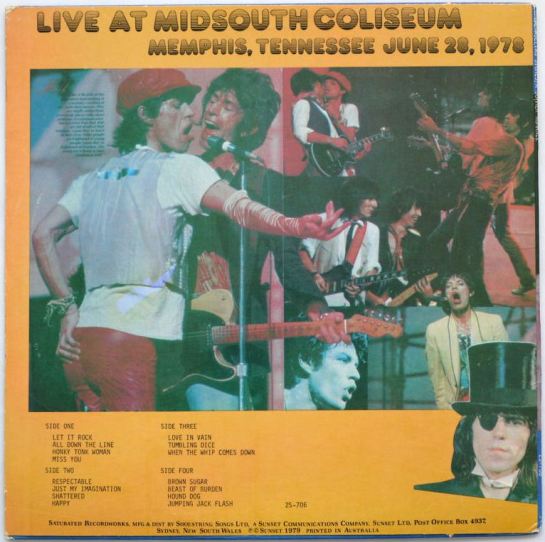 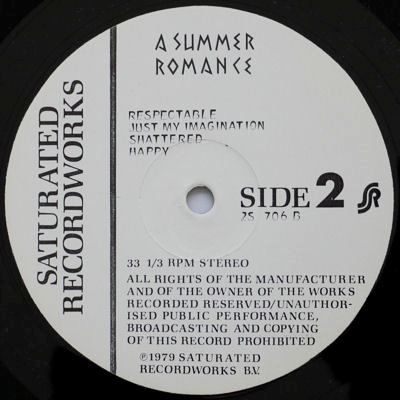 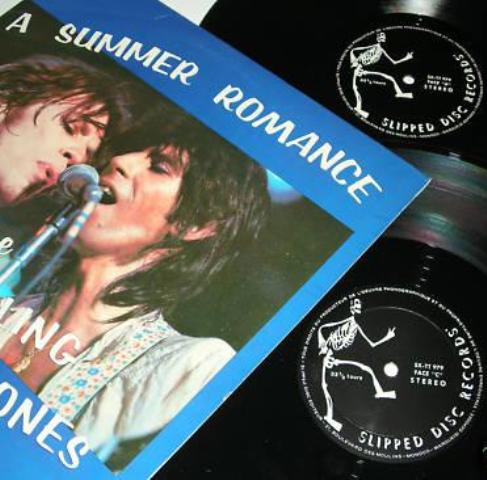 Side 1: Let It Rock/ All Down The Line/ Honky Tonk Women/ Starfucker*/ Miss You
Side 2: Just My Imagination/ Lies*/ Shattered/ Sweet Little Sixteen*/ Hound Dog/ Respectable
Side 3: Beast Of Burden/ When The Whip Comes Down/ Love In Vain
Side 4: Tumbling Dice/ Happy/ Brown Sugar/ Jumping Jack Flash

Only 400 reported to exist as the rest of the run was seized. 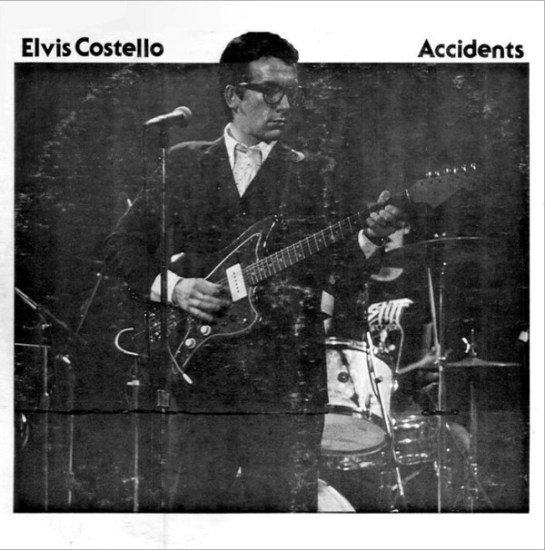 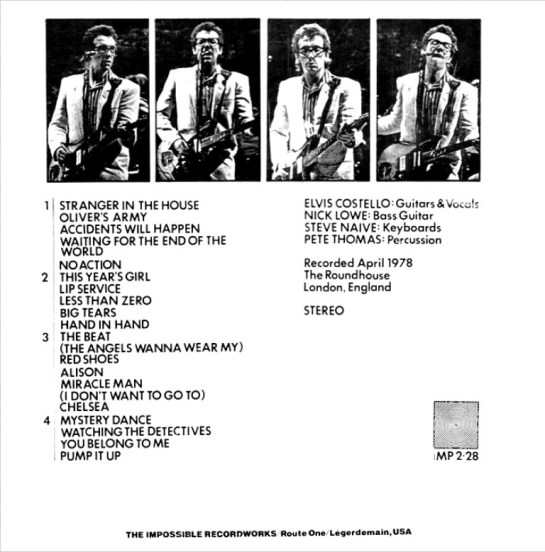 The Roundhouse, London, 1978-04-16. Audience recording.
EC plays the first song solo. Steve Nieve adds organ accompaniment for “Oliver’s Army” and “Accidents”, then Pete Thomas and Nick Lowe join in for the duration. Martin Belmont joins them for “Pump It Up”.

From elviscostello.com: “April 15th and 16th 1978
During the first of a two-night stand at the Roundhouse, Camden Town, Elvis Costello and the Attractions are joined on, “Mystery Dance” by Phil Lynott, the bassist of Thin Lizzy. ” 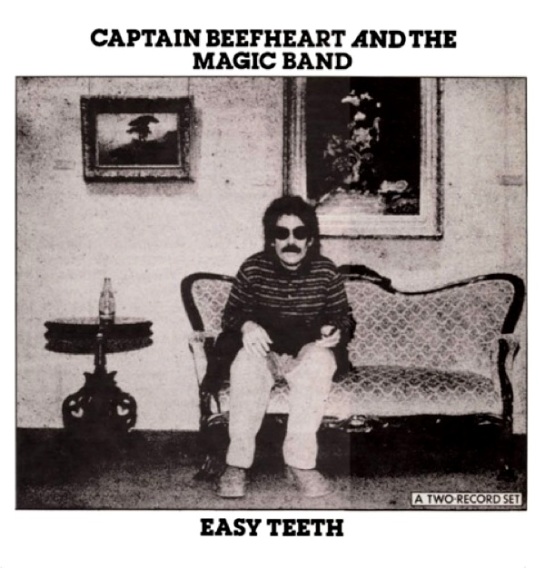 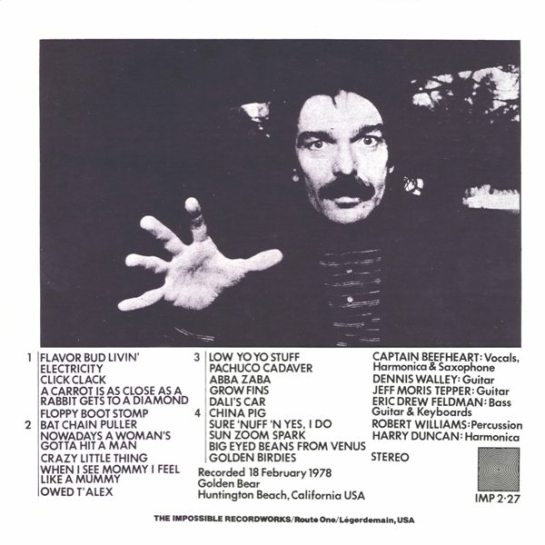 From “Glass Finger’s Big Bad But Beautiful Book of Beefheart Bootlegs – Volume #1” (Apocalypse) / 1994 :
“Easy Teeth on Impossible Recordworks 2-27 (of Légerdemain, usa!). Recorded February 18th 1978 at the Golden Bear, Huntington Beach, California, USA – “A two-records set”. Stereo – US(?) bootleg with deluxe b+w cover with Don Vliet sitting on a sofa in sunglasses on the front cover. Nice black on yellow labels with spiral pattern. Has band line up. The sound of this is not particularly good, muffled and bass-y, so I guess it is a poor “audience recording” [rated ‘Gm’ in Hot Wacks, yet when shared on a live recordings only torrent site it was described as “Clear-sounding and powerful performance, excellent recording, Quality: 8,5/10 – so take your pick”]. It does feature a great amount of “audience participation” which Beefheart appears to enjoy in a sort of “might go out of control any minute” kind of way. He attempts to calm them down by reciting short sections of song lyrics between tracks – giving them a bit of “Big Dummy” and “China Pig”. Then he tries to elicit some sympathy from them with “they put these damned lights on me and give me no water!” and tells them about once meeting Roland Kirk in the middle of the night out looking for “ribs” and advising him to try “the bible”. Before Owed T’Alex he tells them, in a good-natured way, how it is about Alex Snouffer and his tendency to “blame everything on his motorbike” while after Electricity he says “that song is twenty years old… it’s a square dance… that’s right… it’s a dance for squares”. At the end of one song he suddenly finds that Bruce Fowler is in the audience! – he then introduces him to the crowd who, being American of course, start to whoop excessively, and then Beefheart tries to convince Bruce to join them on stage and play, vaguely asking someone in the audience or off-stage “do you have a trombone?”. The show as per usual ends with Big Eyed Beans From Venus but they return for an encore of Golden Birdies to more wild whooping.”

A few listener comments from the above mentioned torrent site:

“I’m afraid that would be me opening side two with a hearty and frenzied shout of ‘FREE BAT CHAIN PULLER!” ”

“i was there! i talked to him for about two hours after the show – one of the high points of my life. my hero…”

“The Captain & Gang seem to be enjoying themselves here, as am I while listening” 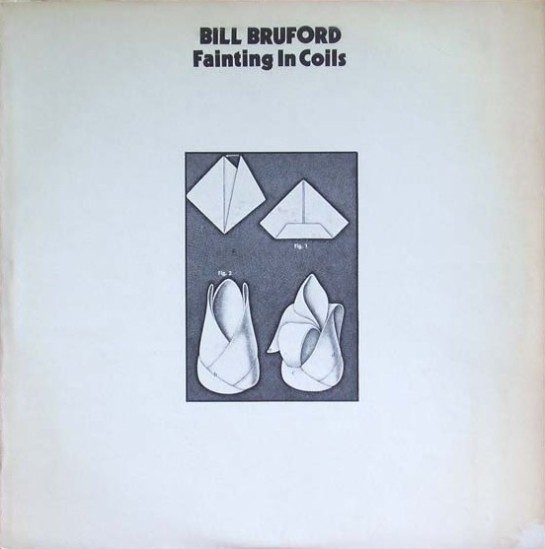 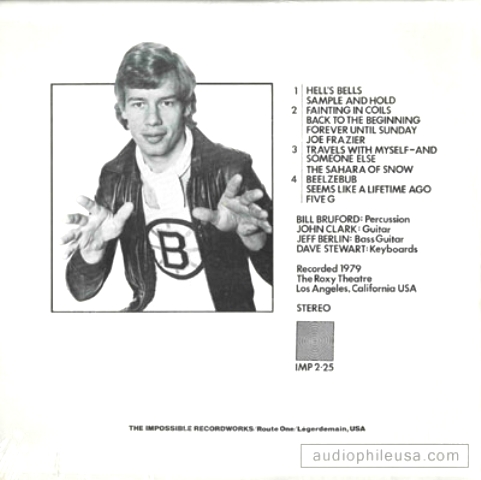 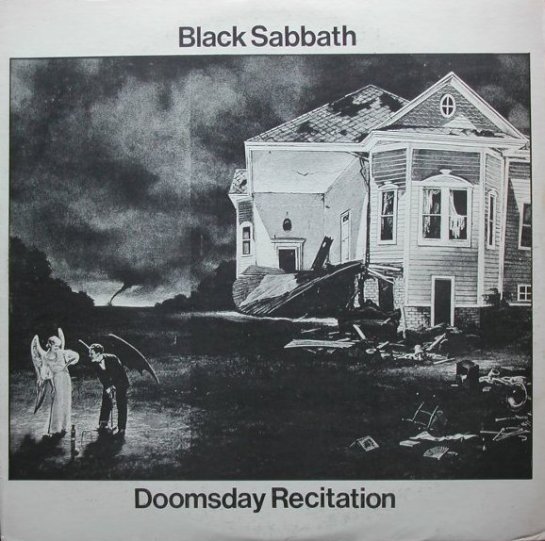 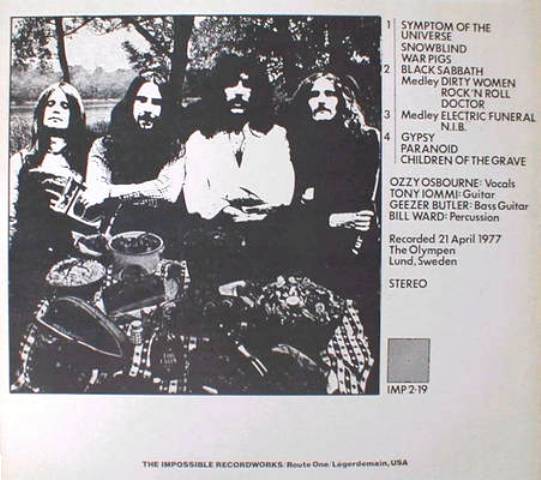 A copy of this mega-rare Euro bootleg on the Stoned Records label:

Above: First pressing, wrong spelling. I guess bootleggers tend to be dyslexic. 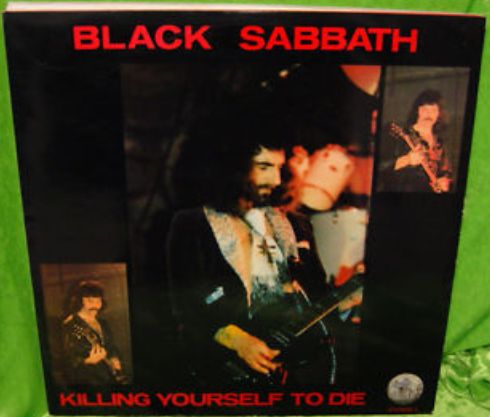 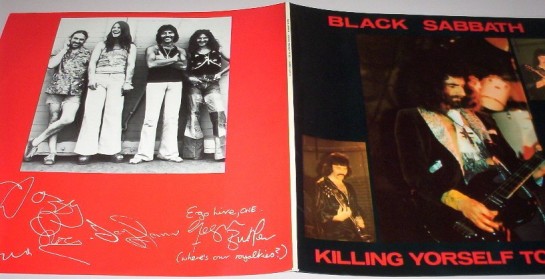 Source: Audience recording from April 21, 1977 recorded at The Olympen in Lund, Sweden

AC/DC opened, until they were reportedly kicked off the tour, however they did play in Lund and there was only one more show after that, so it was not a premature departure by any means: “On April 5th 1977, AC/DC would begin a tour of Europe in support of Black Sabbath, taking them through France, Germany, Switzerland, Belgium and Sweden.

While in Sweden, Malcolm was involved in an altercation with Black Sabbath’s bass player, which led to AC/DC’s expulsion from the tour. Malcolm recalled the incident during an interview with UK music magazine Q in 2003 “We were staying in the same hotel, and Geezer was in the bar, crying in his beer, ’10 years I’ve been in this band, 10 years–wait till you guys have been around 10 years, you’ll feel like us.’ I said ‘I don’t think so.’ I was giving him no sympathy. He’d had many too many [drinks] and he pulled out this silly flick knife.” The last concert of the tour took place on April 22nd at the Scandinavium in Goteborg.”

A few comments from Sabbath collectors sites and an eBay listing, where this item usually goes for $100 – $200:

“The quality of this is good to very good the show it self is EX Ozzy and Sabbath at there best…”
“Sound: 9/10 (IMO)”

“Company and/or Label: Stoned Records, Schweden Catalogue-Number: STD 4 Comentarios: Excelente stereo in deluxe colour gatefold sleeve. Group shots, autographed on back by band. Available in two versions. First one has misprinting on front cover ‘Killing Yorself To Die’ while the second one is showing the correct title. One of the best Sabbath boots and also one of the most expensives. I did receive an e-mail from a guy who was involved in that bootleg. He said that the number of all bootleg-lps printed by Stone Records including Sabbath and Hendrix as well as others were 16.000! The ladder [sic] were the best selling. So you can judge yo(u)rself how many copies of “Killing Yo(u)rself To Die” were made!” [As they only ever produced six titles – and reportedly just under 1000 were pressed of the Queen title Invite You For A Night At The Warehouse – that still leaves more than 2500 copies per release on average. Not that rare really.]

“Black Sabbath: “Killing Yourself To Die” (2 LP) 1977, Sweden/Stoned 4.  Holy grail of Black Sabbath LPs, when this turns up it’s always a counterfeit edition with blurry label art or a colored vinyl re-press, this is a genuine first edition. Killer sounding document of the band’s appearance at The Olympen in Lund, Sweden in 1977. Long considered the best Sabbath live LP and the hardest one to get, this is the sh*t!” 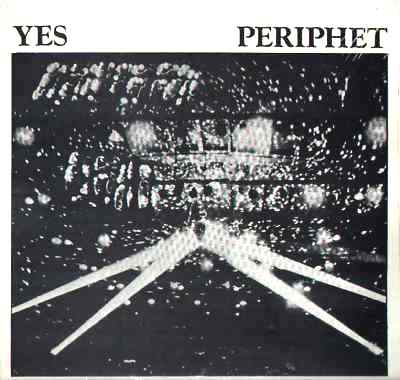 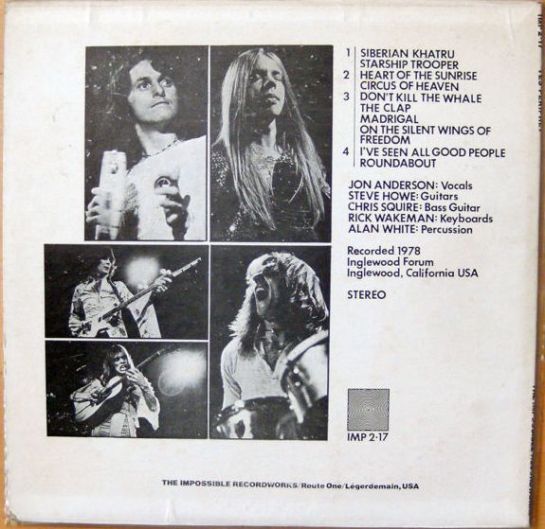 Yes played at the Inglewood Forum on October 5 & 6th ’78, however, collectorsmusic.com claims “The vinyl release Periphet (or Peripet) on Impossible Recordworks released in 1979 claimed to be from this show, but is really sourced from the evening show at Wembley, London on October 28th and broadcast on KBFH.  “.

If that were really the case though, why would allmusic.com rate this much less favorable, calling it a “mediocre-sounding [audience recording]” when comparing it with a vinyl set that was definitely sourced from the KBFH broadcast from the Wembley Arena in London [The “In The Round” bootleg (YS 1600), which was erroneously attributed to the LA Forum (in a repeat of the Police Vinyl Villains scenario, where a UK radio broadcast was claimed to have come from a local concert)]? 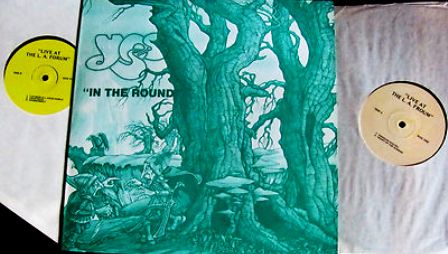 I believe that collectorsmusic.com is wrong here.

From a list: Yes – Periphet [Impossible Recordworks 2CD] live at the Inglewood Forum, Los Angeles, Oct 5 1978. Ex AUD. A Mike Millard recording? [According to my compiled Mike Millard taped shows list, he did tape both shows, so it is possible that one of his traded tapes ended up on here.] 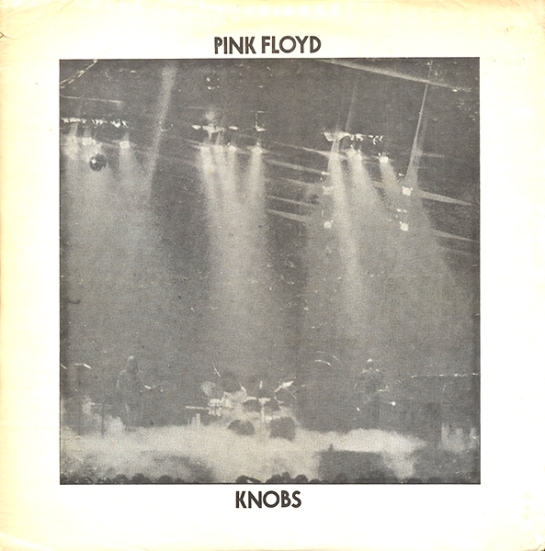 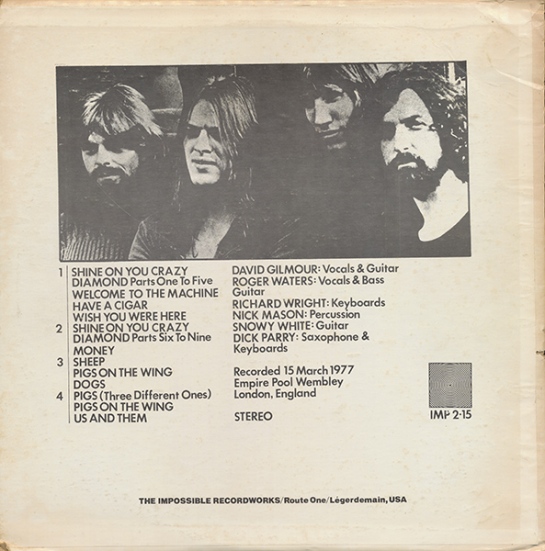 Even though the date and venue are correct, the last track “Us And Them” must come from a different source as it had not been performed on the 15th and it’s a Frankenstein creation to boot, with the first verse repeated several times. More information on these Pink Floyd shows can be found here: http://ygbc.orgfree.com/wow/THEMATIC_WOW_1977-03-15_19.htm 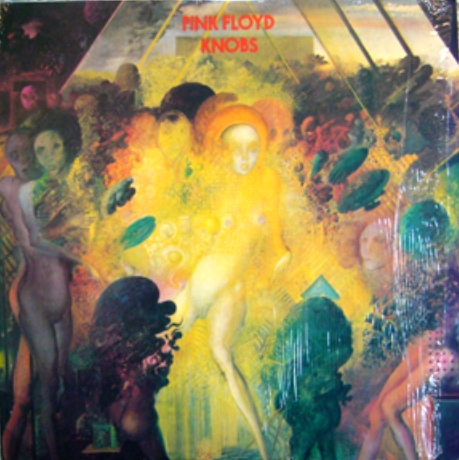 Although listed as a Toasted release, the reissue is commonly found with Beacon Island labels.

were added to the original entries for these recordings and can be found by clicking on the artist’s name on the rignt. 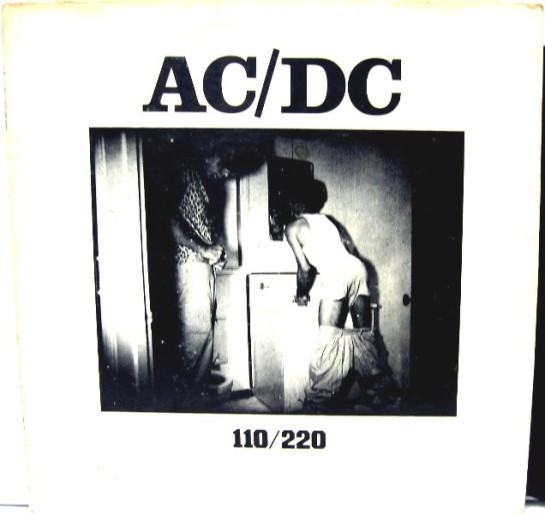 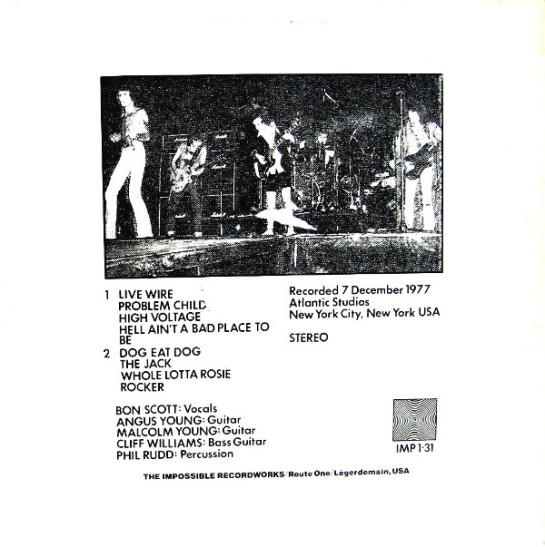 The very first AC/DC vinyl bootleg. Still goes for big money despite simply being a copy of this promo LP: 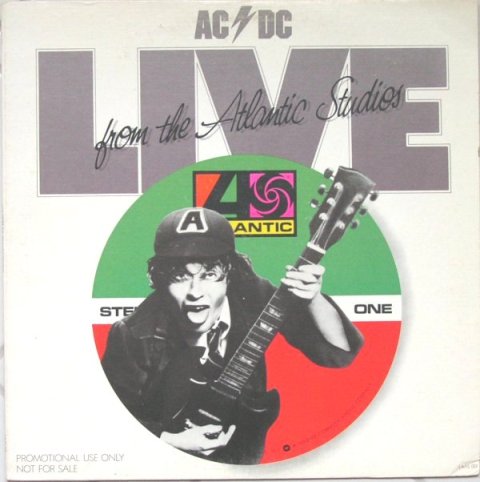 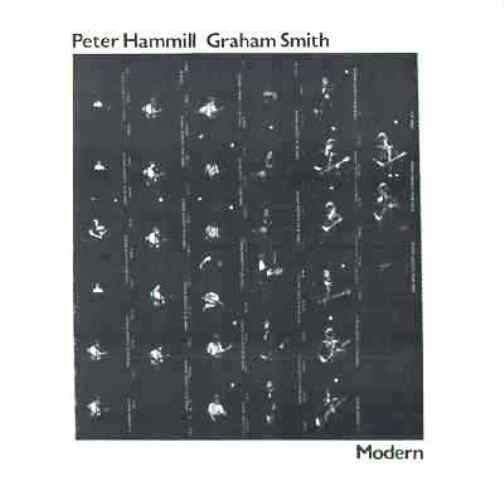 From an ebay ad: