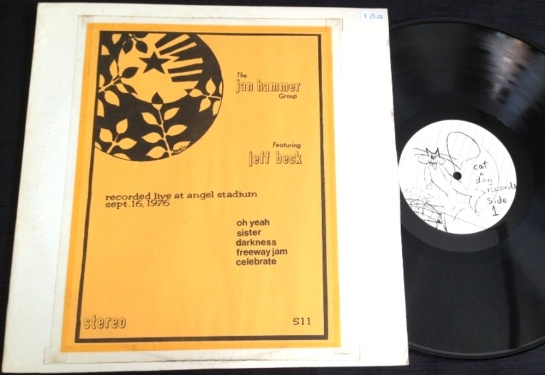 The date given on the cover of the first release is wrong. This was September 12th 1976, Aerosmith headlining the last date of the first North American leg on their Rocks Tour, with appearances by the Jan Hammer Group with Jeff Beck, Rick Derringer and Starz.

This is a sample set list included for comparison and song title correction purposes:

Hot Wacks lists “Exs” for the Hammer/Beck album and “Vgs” for Rick Derringer. The ‘B’ grade listed below is probably closest to what most collectors of live recordings would assign.

In addition to the Jan Hammer Group / Jeff Beck tracks listed on the slip sheet the following exists:

Train Kept A Rollin (cut)
I Ain’t Got You

“Notes: The famed jam with Aerosmith and Jeff Beck, who opened for the band at this show. Anyone else on the bill as well? Maybe someone here who went can clarify. While the Beck set circulates, this is all I have seen of the Aero set leading me to believe the Beck taper only turned his deck back on to capture Beck come out for this encore. After they finish “I Ain’t Got You” Tyler thanks Beck and then says “That Ain’t all..” But it was for the taper who apparently stopped taping.“

“But maybe [forum member] Nitebob will chime in. He mixed Aerosmith on the Beck/Aerosmith tour in the mid 70’s. I remember him telling me about when Beck joined them on stage to play Train Kept A Rollin. He said Beck & Perry were busy trying to outdo each other in trying to make their guitars sound like car horns while Brad just played wonderfully and blew them off the stage. Its a great story and he has some details I’m forgetting here. I think Jeff asked NB himself if they’d mind and he said your Jeff Beck just walk up there. Something like that.”
“I was on the 1975 dates with Rod Stewart, Jeff Beck, and Aerosmith. In 1976 Jeff Beck was special guest on the Aerosmith stadium dates. Jeff told me Aerosmith played the crappiest version of Train Kept a Rollin he had ever heard. Elissa tried for weeks to get Jeff to sit in. he kept refusing until Anaheim. Brad buried Joe and Jeff…….  nitebob”

Side 1: Let Me In/ Teenage Love Affair/ Sailor/ Beyond The Universe
Side 2: Rock & Roll Hoochie Koo/ Roll With Me

I guess it is safe to say that Wizardo was not a fan of Aerosmith, who were really big in the summer of 1976, placing # 1 in a poll in Creem magazine, on the cover of Rolling Stone, etc.