WRMB 326: The Beatles ‘Words Of Love’ can be found under the title link 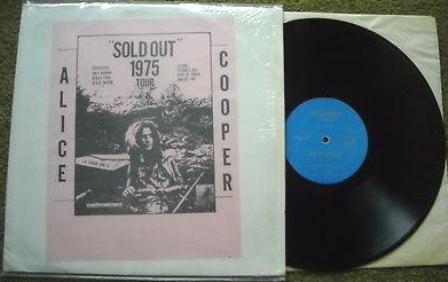 Setlist tracks on the album are in bold:

The last track on the LP is “Ballad Of Dwight Fry”, which comes from ‘The Nightmare’ TV Special 1975.

A concert review can be found here:

Referred to as Alice & Ian in Hot Wacks, which makes it awfully hard to find in any search engine and proves that Kurt from HW never saw an actual copy. 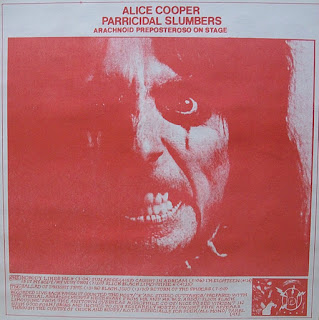 “Contrary to ‘Hot Wacks’ , this was the original issue of these recordings.”

Recorded live at the Rooster Tail, Detroit, MI, 1971.
1. Nobody Likes Me
2. Sun Arise
3. Caught in a Dream
4. I’m Eighteen
5. Is It My Body
6. Slick Black Limousine
7. Ballad of Dwight Fry
8. Black Juju (Studio Version)
9. Return of the Spiders (Studio Version)
****
Another Excerpt from the “BOOTLEG BRAGGADOCIO!” article: ” Takrl also pumped out this Alice Cooper set which was, for some odd reason, a little more obscure’n some of the other Korneyfone releases that I’ve come across which is one reason why I’ve had to rely on a cassette dub of it for quite a long time. But after that ‘un got lost in the vast boundaries of my tape collection it was time that I procured an actual copy and (as usual) I am ever grateful for doing so small pleasure’d life I lead. Now, I will admit that very few of these Alice boots capture Alice in his prime, and in fact other’n the ones that reproduce his 1969 FM broadcast from the Avalon Ballroom as well as another extremely hard-to-find collection of second LP outtakes (not forgetting the slew of ’69 Toronto releases which can be picked up with extreme ease) I can’t think of any Cooper bootlegs that dig into the pre-superstar era with any real depth. That’s why PARRICIDAL SLUMBERS is such a wowzer, not only for its representation of an obscure LOVE IT TO DEATH-period show but for the additional goodies that the folks at Korneyfone stuck on at the ends, most notably the “Nobody Likes Me”/”Slick Black Cadillac” flexi/cardboard disc that somehow made it out to fan clubs around the time of the SCHOOL’S OUT tour. An extremely vital platter for fans of the band especially when you consider “Nobody’s” prominence in the PRETTIES FOR YOU-era Cooper set and how it should’ve made the first LP but somehow didn’t.

For me the big draw here’s the live gunch showcasing the group at their Detroit hardest romping through choice tracks from LOVE as well as a rousing encore of “Return of the Spiders”, that sleeper from the EASY ACTION album back in the days when only Stiv Bators seemed to be paying attention! Now that’s something which I gotta say certainly surprised me considering how at one time Alice was about as anxious to dump his older material from their sets as the Stooges!

Sound’s about as good as these Korneyfone’s get (HOT WACKS gives it an excellent mono but I’d say it sounds very good at best, and perhaps coulda sounded better if some gloss was added on), and personally I think the less-than-perfect sound enhances the music just like a tinny transistor made the 1963 Top Forty come off so energetic. The big question, at least for me, remains just exactly where did this show originate…the announcer thanks the crew from ABC (presumably the television network), which makes me wonder if this was perhaps an IN CONCERT production, but since that show didn’t debut until ’73 I’m not so sure. Was there an earlier appearance of the Cooper group on the perennial #3 network, perhaps filmed for some prime time special that might or might not have been aired? The mystery lingers on…

But nitpicking anal retention aside, PARRICIDAL SLUMBER’s just begging for a proper reish. Like I said, this is the Cooper group at their best long before Alice dove head first into metal cliches and embarrassed himself even worse’n when he was singing those horrid ballads that might not have made you, but made “””””ME””””” do more’n a li’l cringing. Concrete proof that the ’69-’72 era of heavy metal was the form in its prime, though with the advent of Sopors (and in Cooper’s case, Budweiser) what could ya expect but the entire genre to flounder into wallowing pools of ineptness and self pity that might’ve worked for the Music Machine, but not for anyone else! “