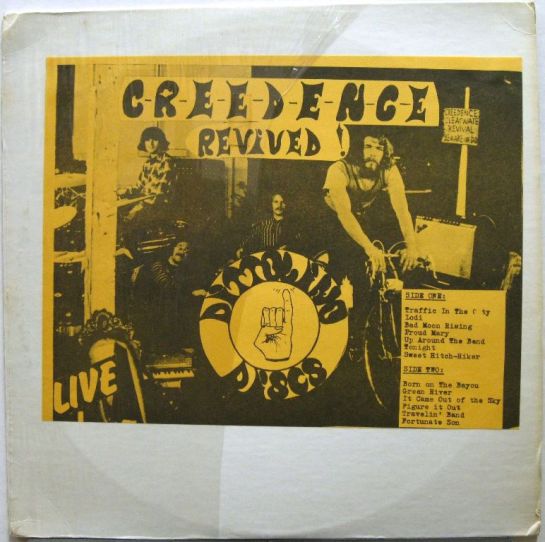 I did not expect a fully printed label for a Dittolini release. Hotwacks, however, states that these tracks were on side 2. They do make more sense on side 1 as these were performed in the first part of the performance.

The other side contains: Commotion / Lodi / Bad Moon Rising / Proud Mary / Up Around The Bend / Hey Tonight / Sweet Hitchhiker

As if I had planned it, Dittolino # 0005 was recorded on a July 4th at the closing night of the Fillmore West in San Francisco, as broadcast by KSAN-FM.

The master is now owned by wolfgangsvault:

The artwork on the blank white cardboard sleeve no doubt added by of one of the previous owners, note the amended spelling to “Dittowino”.

According to HOTWACKS, this was also released as Live In Concert on 5D Records by I have not found any trace or image of this item. Not many CCR bootlegs were made and those that were are not that easy to find. What I did find is the following LP, which likely contained the exact same songs as the Dittolini LP, according to this CCR bootleg page: http://riverising.tripod.com/members-robert/ccrfogertyboots.html

Based on what information we have, the Dittolino release was likely a copy of one of these two:

A late, and somewhat harder to find, addition to the family of HH releases.

One might just have been a reissue of the other done from the same pressing plates. The art work was done by the same person as the Morrison / Hendrix / Winter Jam album:

In 1984, the material was re-released as part of the Box Top series, with the first 50 copies on clear PVC:

Part of the July 4, 1971 broadcast was pressed in the 1980s on a radio station live sampler as part of the Retrorock series together with selections from a recording made at Oakland Coliseum on January 31, 1970. The radio station broadcast or even an original LP was subsequently bootlegged in 1986 as Live in the USA 1971 (BR-13868-5):

Roots or Root Records? It seems that this 1980’s release could not quite make up its mind.

Circa 1987 saw a final release of the Fillmore West material on side 2 of this release as part of the BBR / (fake) Instant Analysis series as BBR 09. Some sleeves (first editions?) are reported to have John’s last name spelled “Forerty “.

Happy 4th of July to all that celebrate it.