I believe originals have Slipped Disk labels. It was later reissued with Unmitigated Audacity and Modern Jazz Records labels.

[The final two songs on the B-side, “Do It Again” and “Reeling In The Years” are live recordings.]

A customer brought this tape into the record store where I worked back in 1976 (the Slipped Disc [in the Panorama City district of Los Angeles]). Copied this with my Teac 4070G 1/4 track R2R @ 7 1/2 ips using a new TDK Audua L-1800 tape. I think our friend had a Teac deck also.

The one technical flaw is that this seems to have been recorded over previously recorded tape that had not been properly degaussed. Something can be heard in the background at the beginning and end of the last 2 songs. It is way down in the noise floor but can be heard in the headphones.

By the way, the bootleg LP version is also from this tape. Here is the story behind that one.
Used to have a “live tape day” on Thursdays at the Slipped Disc.
A record store where I worked from 1976 to 1987. Anyone was welcomed to bring a deck and patch in. It was a big party with beers and whatnot every week.
A certain person I knew showed up the day I shared these outtakes and got a copy.
He made a copy for a friend who then sold a copy to the bootlegger ‘cause I wouldn’t.
All those copies were done on cheaper cassette decks but it still sounded nice.
Released as “Bent Over Backwards” by a friend of ours (Vicky Vinyl) and would you believe they used our Record Store name for the label! Damn! 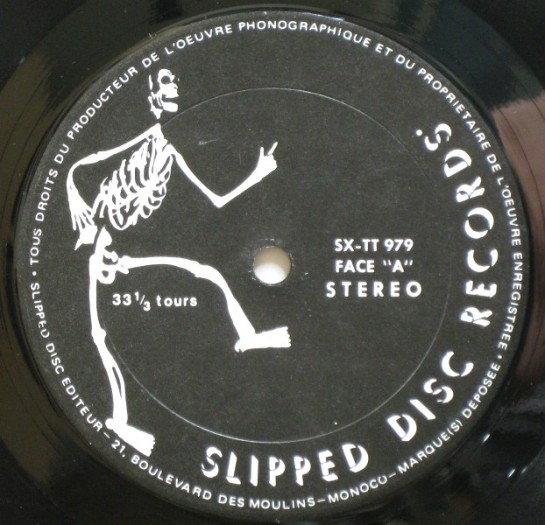 Yes, our record store did get busted but we had nothing to do with manufacturing these things. I was adamant and wouldn’t sell these recordings to the bootleggers who I actually knew pretty well. Didn’t matter after our store name became an underground “label”. We got off with a minor scare but the FBI is nobody you want to deal with. Bummer was we couldn’t stock bootlegs anymore after that.

I scanned the LP and cover for that “Bent Over Backwards” LP which of course I got right away. Got copies of every bootleg we would carry as I was the one designated to screen them and order the good ones.
Story over.

For historical reference only and not intended for resale or any commercial use.

Dedicated to Kevin Webber, my best friend and somewhat of a boss for over ten years at the Slipped Disc Records in Panorama City.
It was one of Kevin’s friends that brought me this tape.