Also exists with a blank yellow label, as seen on WCF’s copy of Rod Stewart with the Faces live at the L.A. Forum.

Released ca. 1972 – it should be noted that WCF did not release their albums in a strict chronological order, so this album numbered 999 was not released after 901 & 902 (JETHRO TULL – US TOUR APRIL 1972; ROLLING STONES – THE STONES AMERICAN TOUR IN L.A. 1972) but likely earlier.

The title may have been a joke perhaps. Nassau Coliseum held its first rock concert – Three Dog Night – (a couple of months after its opening) on 29 April 1972 and none of the tracks on this album sounded like they had been recorded live at an arena.

It was no surprise then that when the album was reissued by WCF in 1973/4, it received a new title (still misleading though). 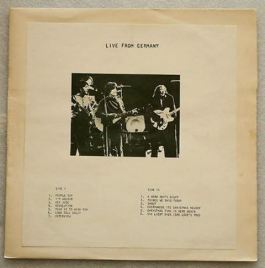 WCF had copied this album from this rare and half-decent Beatles bootleg released in 1971, THE BEATLES LAST ALBUM 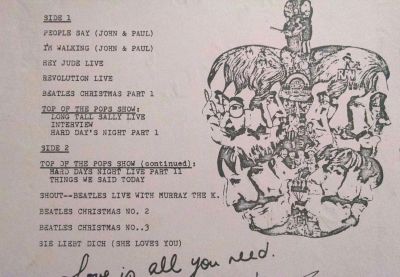 Three partial Christmas flexi disc recordings (1966, ’67 & ’69), pirates of the German version of “She Loves You” and the John & Paul 45 plus the highlights and first ever release of their David Frost performance in 1968 (years before the Deccagone 45), three songs from their BBC Top Gear appearance as described below and also “Shout” from their ’64 Around The Beatles TV special. Really not too bad for 1971.

“More material appeared in the early Seventies. This did not usually fill a complete LP; one or a few tracks, at times a single programme, were added to other material. The first programme to appear was Top Of The Pops, the U.S. rebroadcast of Top Gear July 16, 1964. This was independently released by an anonymous label on the album titled THE BEATLES LAST ALBUM, and by CBM on THE NEVER RELEASED MARY JANE. The first one was released in (possibly) late 1971 or early 1972, matrix 01 971. It was copied in 1972 by White Cover Folks as LIVE AT NASSAU, matrix 999, originally distributed with a yellow label. This album was repressed in 1973 and 1974 as TOP OF THE POPS/LIVE IN GERMANY. The CBM record (THE NEVER RELEASED MARY JANE), with matrix 3585, was originally distributed in November 1972 with a purple slipsheet and label with printed title. The subsequent issues had generic labels and usually a blue printed insert. This session was also included on a record by Highway HiFi, a subsidiary of TMOQ-Smokin’ Pig, titled TOP OF THE POPS, matrix HHCER 111. This LP was first issued in mid-1974 with a slipsheet printed with “rainbow” effect, and repressed a number of times until 1983.” [ excerpt from A COMPREHENSIVE BEATLES HISTORY of THE BEATLES’ BBC Bootleg Releases. (ref: Great Dane’s Complete BBC Sessions liner notes) ]

THE BEATLES LAST ALBUM had previously been reviewed in this post from 2013.