“In 1979, Melvin Records released a bootleg EP entitled Visit To Minneapolis, which claimed to contain three songs from The Beatles’1965 Minneapolis concert. Closer inspection proved them to be excerpts of a Houston performance…” (Way Beyond Compare, Winn, p. 370)

If I could interview Eddie from Melvin, questions about this release would be at the top of my list. were they given these tapes and told this was all from Minneapolis? Or was this an “in house” joke? … Fact is that the three song fragments were altered to sound much worse than their originals in order to obscure that they really came from the Houston performances on August 19th ’65 and a Beatles bootleg sensation since their 1978 release on audifön:

The Beatles are closely miked but the reporter questions spoken into a mic that’s passed around are sometimes hard to hear.

The clip found on YouTube includes material not found on the EP and vice versa. Over 26 minutes exist from a broadcast on WDGY-A covering more topics

“Police Inspector Donald R. Dwyer did not mince words expressing his disdain for the mop tops, calling them a “typical traveling troupe,” akin to circus performers.  He claimed he’d found a girl in Paul’s room and charged him with making a “false hotel reservation.” Fortunately, the girl was able to prove that she was 21 (and from Cleveland). Dwyer told the Minneapolis Star that “Those people are the worst I have ever seen visit this city,” and in a press conference said “if they did not come [back] it would be too soon for me.”

But [Bill[ Diehl [of WDGY who MC’d the show] says that he was up there with the Beatles, and that there was no way that, with all the money invested in them, that Brian Epstein would allow them to be involved with the scandal of having girls in their rooms, and that the police lied about what went on.  Diehl said that the whole thing was blown completely out of proportion, and when the Beatles said they’d never come back to Minneapolis, Bill said he didn’t blame them.”

While the Beatles never did make a return visit to Minneapolis, as someone in their touring party stated (Neil Aspinall?) the guilty party here, Paul, has returned three times (1876 with Wings and 1993 + 2014 as a solo act).

Ironically, an audience recording was made that night at Metropolitan stadium – sounding nothing like the fake tracks on this EP – finally surfaced in 2002 and disproving the forgeries even more as “Twist And shout” had not even been performed that night (likely to give John’s throat a rest). By the way, with just under 30,000 out of 40,000 tickets sold, Minneapolis was the only tour stop on their 1965 North American tour that was not a sell out. 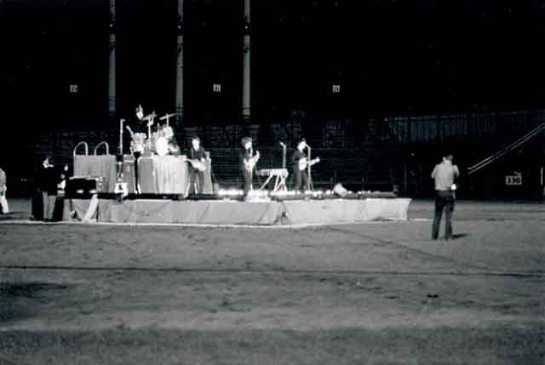 Their lowest stage set up since early 1963?

All you would ever want to read about their visit to Minneapolis: