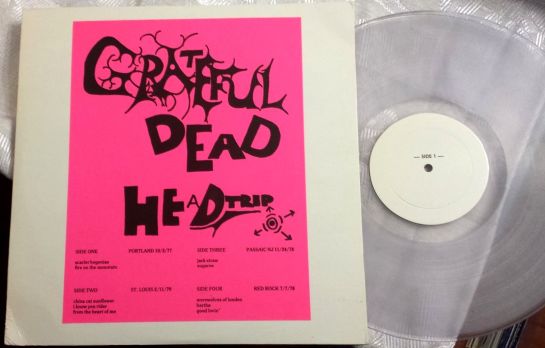 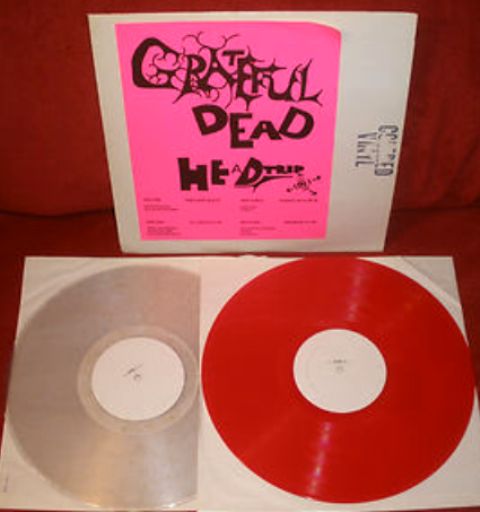 Different colored slip sheets this time around. I only found one type of stamp and only the clear/red PVC version so far.

The only release by this label to come with dated sources. If you have better quality images for this title, please leave a comment.

Although this release is usually described as excellent sounding, sides 1 and 2 sound OK at best. Instead of dedicating all four sides to one concert as before, they decided to feature short excerpt from four different shows, including one well known recording.

The tracks and supposed sources are:

Side 1: Scarlet Begonias – Fire on the Mountain – recorded at Portland’s Paramount Theater on 2 October 1977 (this date can be confirmed)

Side: 2: China Cat Sunflower – I Know You Rider / From the heart of me – an audience recording from the Kiel Auditorium in St. Louis, MO on 11 February 1979

Side 3: Jack Straw / Sugaree – from FM broadcast, Capitol Theater, Passaic, NJ on 24 November 1978 (already or soon to be featured on the multiple set FOR DEADHEADS ONLY (POOW PRODUCTIONS) 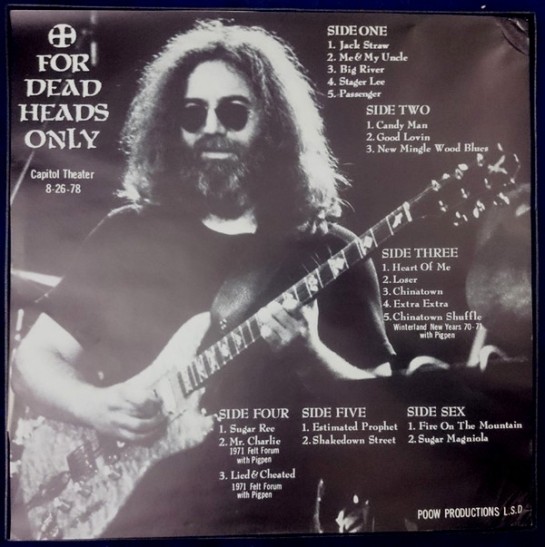 Side 4: Werewolves Of London / Bertha / Good Lovin’ – supposedly from the Red Rocks Amphitheater near Denver, CO on 7 July 1978 but the set list on archive.org proves it’s from next day’s concert.

So what are “Betty boards” and how were they almost lost forever?

“Betty Cantor was still in her teens when she began setting up mics and helping to record sound at San Francisco venues— first at the Avalon Ballroom and then, the Carousel (the latter during the Grateful Dead’s brief stab at venue management in 1968). She worked alongside Bob Matthews, initially assisting with setups during the recording of the Dead’s Anthem of the Sun. A true pioneer, as a woman staking her claim in a patriarchal business, she partnered with Matthews into the early 1970s to produce and engineer live multi- track recordings (she had a hand or two in Live/Dead) as well as studio efforts (Aoxomoxoa and Workingman’s Dead).

While she worked for other artists during this period, she maintained a close relationship with the Grateful Dead, catalyzed by her marriage to crew member Rex Jackson, who would die a few years later in an auto accident. (The philanthropic Rex Foundation is named in his honor.)

“My late husband started recording on the road when he was on the equipment crew,” Cantor Jackson explains. “He and I purchased our own gear and tape. I recorded whenever I could get to the gigs. I recorded the Grateful Dead frequently when they were at home venues, I recorded any and all Jerry Garcia Band gigs I could get to for years, in all its configurations, as well as other bands I liked whenever I could. In those days, bands were cool and happy about me getting a feed.” [source: relix.com]

If you have any interest in this topic at all – and some time – I can highly recommend the following article, which should answer all questions you have ever had about the Grateful Dead and the largest archive of live recordings by any band on the planet:

and as it’s specifically singled out in the article, this audio clip will come in handy: https://www.youtube.com/watch?v=vR2_JiwxdE8

Also, if you listen to Betty’s soundboard from the date featured here on side 1 – although probably from an audience source on the vinyl bootleg – it is a very sweet sounding recording:

“She mixed to her own taste. “It has my tonalities. My sound is beefy. My recordings are very stereo, very open, with a lot of air in them. You feel like you’re standing in the middle of the music. My feeling is everyone wants to play in the band.” “