Side A: Vanish the fire / Race with the devil / Demolition boys/ Emergency [Girlschool]
Side B: Overkill (listed as ‘Don’t swear it’) / Too late,too late / Shoot you in the back/ Step down / Jailbait [Motörhead]
Side C: Leaving here / Metropolis (listed as ‘the drug police’) / Train kept a rollin’ / Bomber / Motörhead
Side D: Please Don´t Touch / Emergency / Bomber / Ace Of Spades / Dirty Love [pirated tracks, studio versions]

Source (for the live tracks): The broadcast part of Girlschool’s opening set and Motörhead’s set at Nottingham’s Theatre Royal on 20 August 1980) taken from a TV program called Rockstage (see the N.M.E. clipping below).

Side D presents all the tracks from the following official 7 inch releases (ripping off the artwork in the process as well:

Side D: Tracks 1 – 3; “The record was released on 14 February 1981, as St. Valentine’s Day Massacre EP and reaching No. 5 in the UK Singles Chart, it became the biggest hit either band ever had in the charts.” 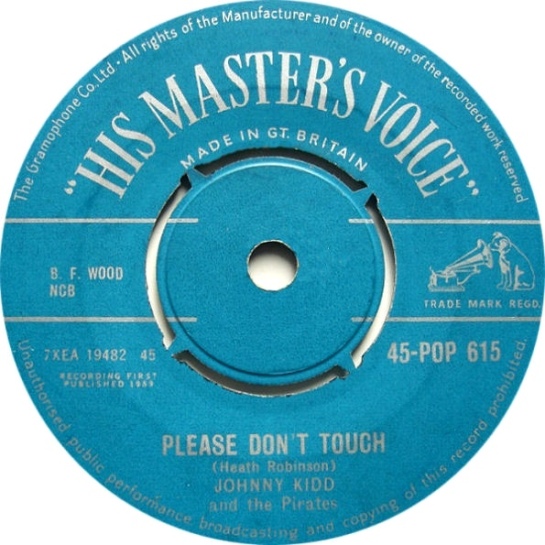 As this material was also released in Japan in 1981 on the Motorschool 12″ EP, the producers of this bootleg (likely the same as those responsible for the UD titles) must have been really desperate to fill that fourth side.

The Motörhead part of the Rockstage broadcast was released officially for the first time on their 1992 Live Jailbait album. This relegates The Swinging Pig’s No Sleep Till Rockstage (TSP 500-43/1) to pirate status. Finally, the video was included on their 2009 Anthology DVD.

Some copies are numbered and stamped

and came with a (poor quality) T-shirt.

Recording date may have been the 16th of May.

“Sometimes it is said that the first 150 copies came with a free shirt (black with “surprise” print) and were individually numbered and stamped but as you can see on the pictures there are copies numbered higher than that. As the shirts had a bad quality (the print was hardly visible after it had been washed several times), it was repressed in the 80s in a small quantity (white shirt, black print).”

Released on the UK (?) e.f.ox556(7) label (referred to as Wolf production on discogs.com but that was a (fake0 name used for the Motörhead release only) – the same people who produced the Joe Jackson EP box set with the Lausanne, Switzerland 1979 performance – THE WAVELENGTH’s (sic) WANDERING:

Motörhead were big among my hi-school classmates in the very early 80’s. References to their song and album titles peppered the conversations. I do remember a rumor that they were the loudest band at the time and concert goers tried to keep a distance to the PA. No Sleep Till Hammersmith was extremely popular to say the least. To be honest, I was never a big fan of the music, that “swarm of amplified angry bees sound” sound but since watching the Lemmy documentary and his funeral on YT, I am definitely in awe of Lemmy Kilmister, the genuine human being and well mannered gentleman, who lived his life on his own terms. Cheers, Lemmy!