Although the back cover claims this was recorded at the L.A. Forum, where the band did play three shows that months, this final UD release is another “hidden source” title, actually recorded at Osaka’s Expo Hall, 7 (?) June 1982 – their second visit to Japan as part of their For Those About To Rock Tour. 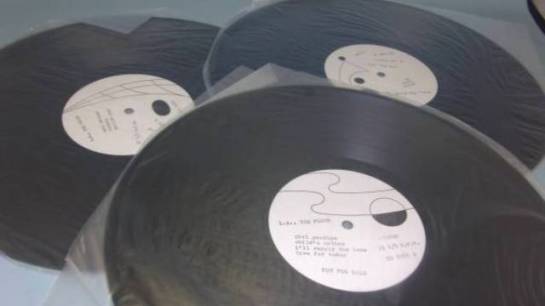 TOTO had just finished their second tour of Japan in May of ’82. This was the first TOTO bootleg (unless the European 99 came first, which I doubt). 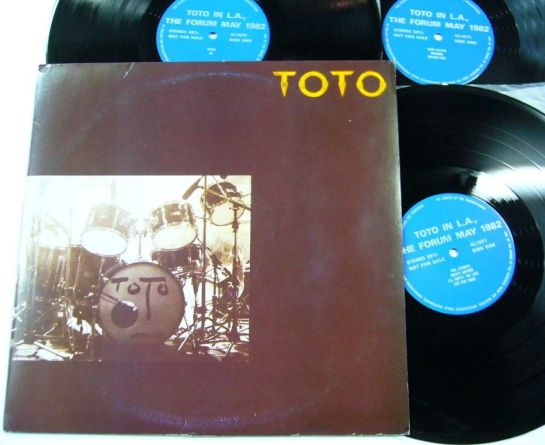 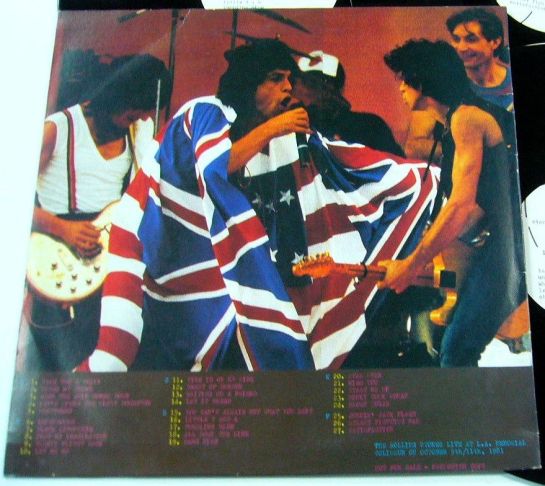 Japan: 1982 – dbboots has this as 1986 but when looking at the UD releases in sequence, this cannot be correct.

Source: Very good stereo audience recording from the Los Angeles Memorial Coliseum shows. “Although there are several bigmouths by the recorder who plague this tape making moronic statements and singing out-of-tune, it’s balanced out by the benefits of hearing the reaction entire audience.  Almost like a wave, there is a liveliness that sometimes rises from the back of the crowd which can send chills down one’s spine.  ” [collectorsmusicreviews.com]

The set list is in order and complete, with the exception of ‘She’s So Cold’, which was played between ‘Tumbling Dice’ and ‘All Down the Line’. dbboots states that ‘Start Me Up’ comes from the second show on the 11th but reading collectorsmusicreviews description of the CD version of The Rolling Stones Live At LA Memorial Coliseum ’81 (no label) indicates that ‘(I Can’t Get No) Satisfaction’ was from the 11th.

A while later, perhaps as late as September 1985, as listed in dbboots. someone in Japan mixed up the tracks in random order and reissued the same material spread across a double and a single album on these ‘no label’ titles. 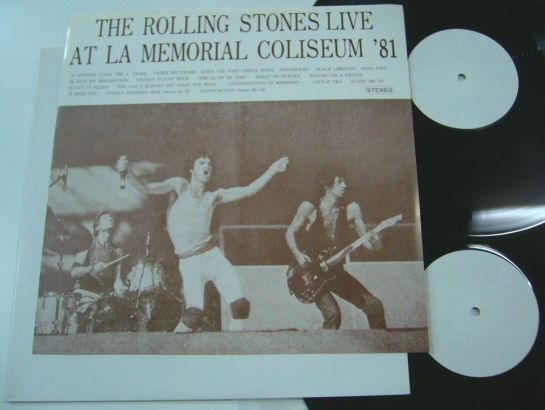 I have found no matrix # for this release.

Finally, what appears to be created out of the need to accommodate left over discs, this insert cover title was created (I assume insert releases were the exception and seen as less desirable). 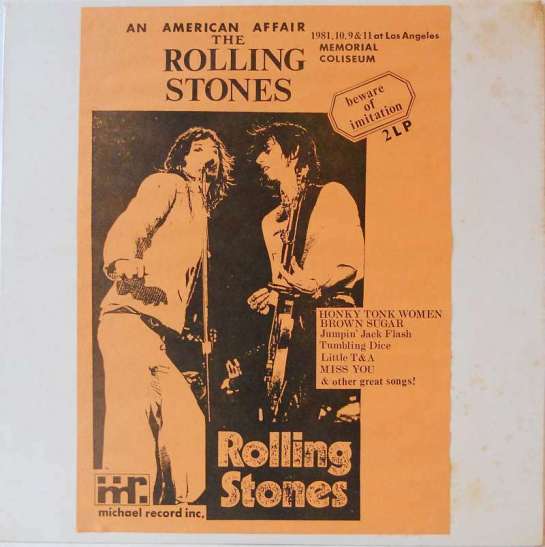 “All of the 1981 soundboards are very good, but the audience tapes capture the weight of the events and the interactions between band and audience.  Although there are several bigmouths by the recorder who plague this tape making moronic statements and singing out-of-tune, it’s balanced out by the benefits of hearing the reaction entire audience.  Almost like a wave, there is a liveliness that sometimes rises from the back of the crowd which can send chills down one’s spine.

Bill Graham introduces the band before “Under My Thumb.”  The guitars cut out twice during the second number “When The Whip Comes Down” (“Los Angeles, it’s beautiful to be here even if we have no electricity. I have electricity in my brain” Jagger ad-libs during the track) “Can you keep the electricity on, Showco?’ he asked afterwards. The volume in the microphone becomes lower and Mick asks if he can be heard before “Shattered”.

He also gives the first of several exhortations for the front of the crowd to move back. “Los Angeles, city of the shoes” he says, an obvious reference to the July 24th, 1978 Anaheim show when the band were inundated with footwear of various kinds.  “Please don’t throw bottles at me because they hurt when they hit me” he says before “Black Limousine.”

“Time Is On My Side” is introduced as some “sweetness” and seems to calm the crowd down a bit and is followed by several more relatively more mellow songs “Beast Of Burden”, “Waiting On A Friend”, “Let It Bleed” and “You Can’t Always Get What You Want”.

The versions of the latter track by this point in the tour were terrific with Ernie Watts’ saxophone solo replacing Ron Wood’s guitar solo from previous tours. He had just joined the band the previous show in San Diego and plays a great jazzy riff which is unfortunately buried too far in the mix to be enjoyed. The show picks up again with “Little T & A” and someone actually throws a gift to Mick on stage. “What’s this? Grass, pills, acid, my goodness everything in one package” before “Tumbling Dice”.

Afterwards Mick is ready for “Hang Fire” but the band launch into “She’s So Cold” instead, a moment of either pure spontaneity or miscommunication. Again Mick wants “Hang Fire” but gets “All Down The Line” instead. “Starfucker” contains amended lyrics with Jagger singing: “Jimmy Page, not quite her age / I never knew the reason why” (which might be a reference to Page’s girlfriend Lori Maddox).

“Miss You” is for some reason very sloppy on this tour and this show is no exception. “Start Me Up” was the big hit at this time and is played flawlessly. The band is able to finish the set with the classics without further incidents.

Like the original vinyl, the October 11th encore “Satisfaction” is included as a bonus track.  It was played that night in lieu of “Street Fighting Man” and offers a bit more comprehensive record of The Stones’ visit to Los Angeles. “ 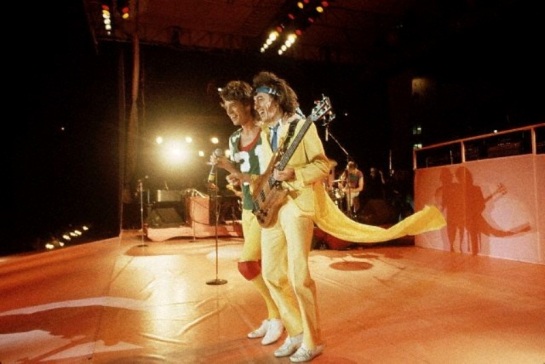