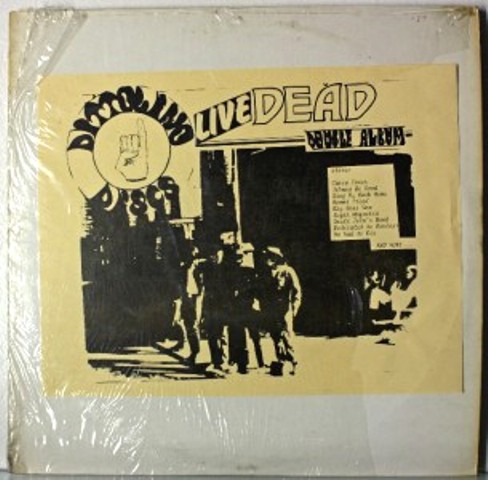 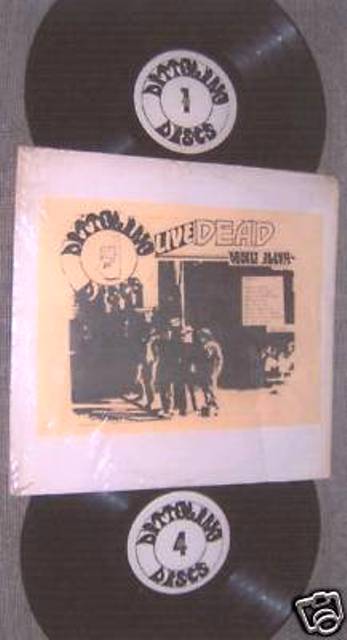 The Dead played two sets at the ‘Closing of the Fillmore West’ five day concert series. Their performance took place on July 2nd, lasting into the early hours of the 3rd.Same source as Dittolino’s Creedence Clearwater Revival release featured on this blog recently.

“This was an FM broadcast. I heard it live on KMET FM in Los Angeles. I was a lifeguard in Newport Beach at the time. My friends and I were all pumped up to hear this show since KMET was building it up all week long. We gathered around the stereo and listened, and I remember the NRPS show too. It was also broadcast. I remember wishing I had a recorder, but it was 1971, I was a poor just graduated high school kid and, oh well, hey, I just found the show again when I was 53. Not bad! This show was also available a few months later on a bootleg vinyl that I bought and wore out on the old phonograph device.”
“This is from the KSFX-FM broadcast the night of the show.KSAN in SF and KMET in LA also aired the live broadcast.”

It seems that many of these performances made it onto the double set but I am not enough of an expert to confirm what is missing. 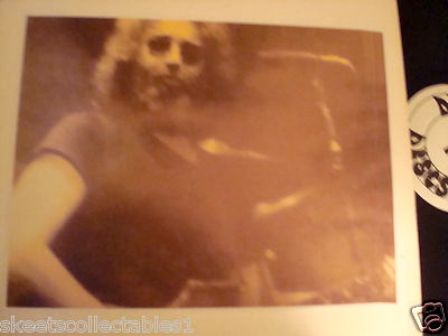 This auction from February of 2013 called the album mystery of the dead but this was most likely a made up title but this is obviously a copy of LIVE DEAD, visually enhanced by a former owner with the added photos.

“this is a mysterious looking album […] on dittolino label, the cover has a picture of garcia on the front and the band on the back, i hav’nt seen the garcia picture before the back one looks like it may have come off historic dead? i do not know,  the songlist side 1. 1. bertha 2. bobby mcgee 3. lied, cheated 4. china cat 5. i know you rider side 2. 1. playing in the band 2. loser 3. aint it crazy 4. me and my uncle 5. railroad blues 6. sunshine daydream side 3. 1. sing me back home 2. mama tried . casey jones 5. johnny b. goode side 4. 1. sugar magnolia 2.uncles john’s band 3 the other one, dedicated to owsley “in jail”, this is an album i have not seen before, i believe it to be very rare, this is a soundboard recording, live from somewhere, bill graham does an intro,”

This was a popular bootleg due to its excellent sound quality and was issued by many bootleggers. Who was first? I actually do not know in this case. 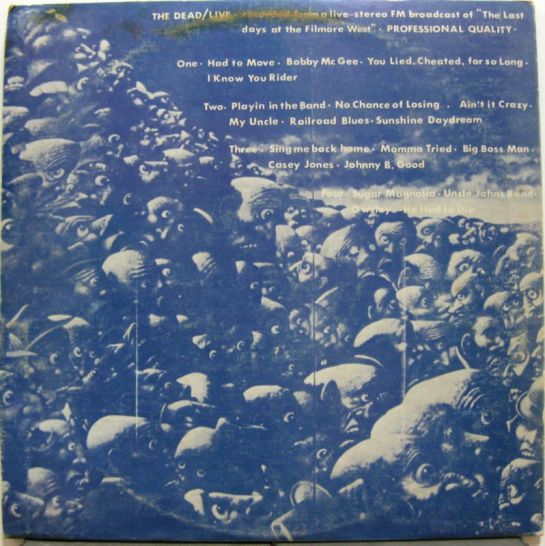 Available in blue and pink. The front covers are identical but the back covers are not. 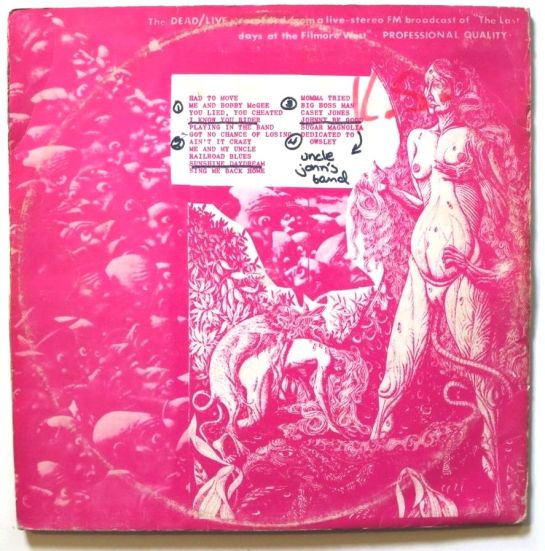 Referred to as a Dittolino release at auction, this version looks like an early Berkely release to me, presented by “Record Revolution”. Hopefully, nobody happened upon this cover art while under the influence of a bad LSD trip – I’d hate to have this crowd come to life and jump off the cover. 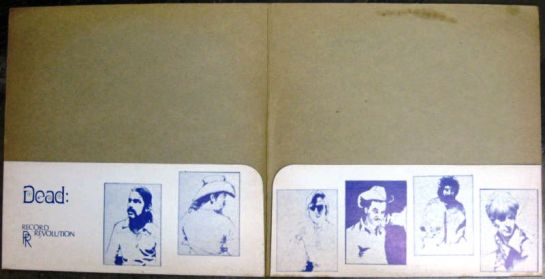 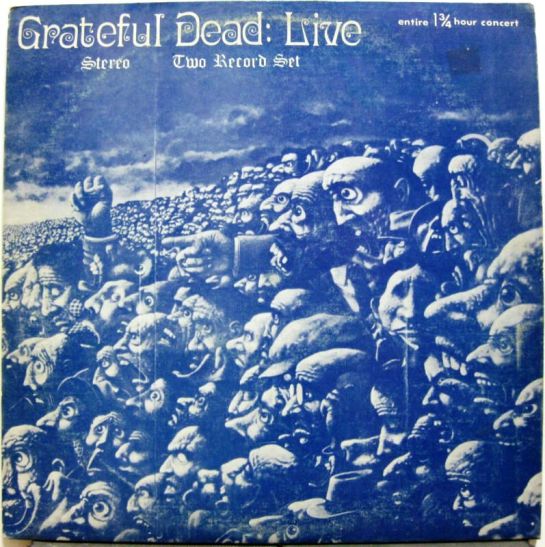 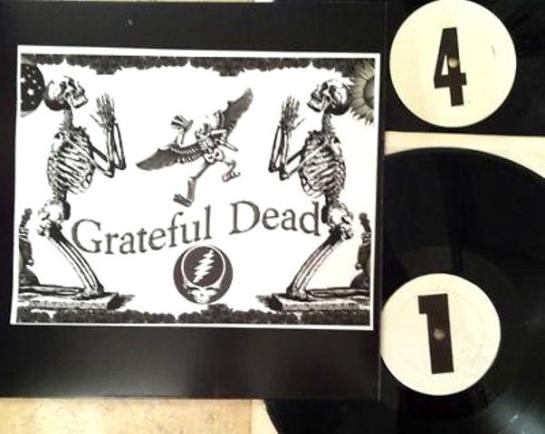 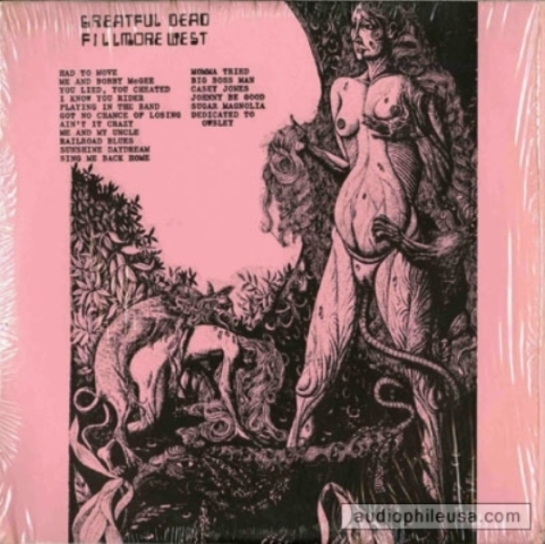 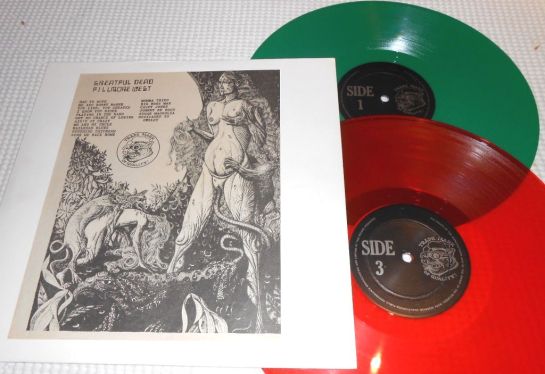 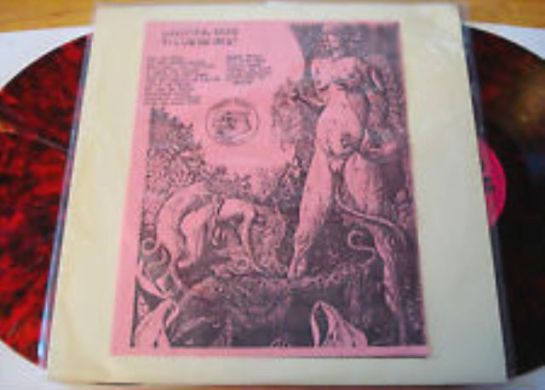 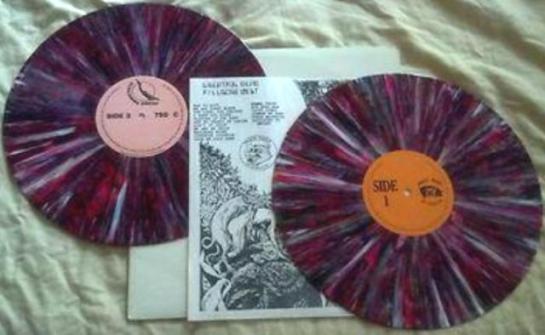 Strange labels on these colored releases with the smoking pig logo.

The TMOQ / mammary presentations MM 4 release recorded LIVE in concert – matrix: MEL (later editions with the printed Kama Sutra cover had DEAD-2/1), seems to derive from a radio broadcast from the Winterland in 1970 (October 4th?) and not from the last night at the Fillmore West as listed in HOTWACKS. 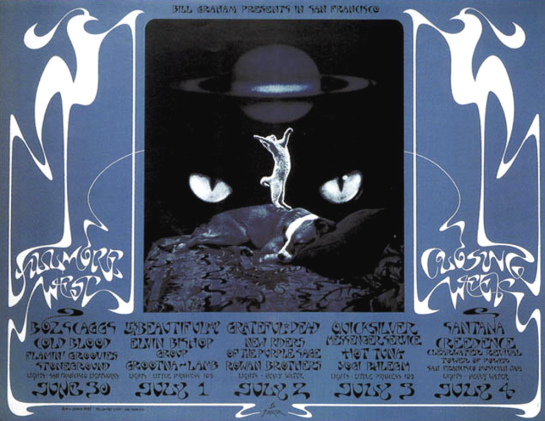 Two tracks – “Casey Jones” and “Johnny B. Goode” were officially released in 1972 on the 3 LP set Fillmore – The Last Days