Vicky Vinyl had bounced back from her initial bust and kept making bootlegs. By 1978 she reissued older and pressed new releases on the Slipped Disc – Piste records, claiming to come out of France.

“One of the reasons [Bruce Springsteen’s] 1978 Tour is so well-remembered, and often viewed as the peak of Springsteen and the E Street Band in concert, is that several complete shows were broadcast live on progressive rock and album-oriented rock radio stations. These included the July 7 show at West Hollywood’s The Roxy, broadcast on KMET, the August 9 show at Cleveland’s Agora Ballroom, broadcast on WMMS, the September 19 show at the Capitol Theatre in Passaic, New Jersey, broadcast on WNEW-FM, the September 30 show from the Fox Theatre in Atlanta, broadcast on about 20 Southeastern stations, and the December 15 show from the Winterland Ballroom in San Francisco, broadcast on KSAN-FM. These broadcasts were mixed by Jimmy Iovine and of high audio quality, and were listened to at the time by a larger audience than attended the concerts. ” [wikipedia – Darkness Tour]

“[Springsteen] had already aired ‘Point Blank’, ‘Independance Day’, ‘The Ties That Bind’ and ‘Sherry Darling’ in widely taped radio broadcasts, which even now were being pressed to bootleg disc: something, which as of July 1978, Springsteen had insisted ‘doesn’t really bother me.’ His introduction to ‘Sandy’ [actually, it was his introduction to ‘Racing In The Street] at the December 15 Winterland show, suggesting the Jersey girls would get to hear this particularly fine version ‘through the magic of bootlegging’, rather implied he still didn’t. But by 1979 he was no longer so keen on these clandestine copyists. Or more accurately, perhaps Jon Landau on behalf of Bruce Springsteen was less keen on them. ” [Heylin in E Street Shuffle: The Glory Days of Bruce Springsteen and the E Street Band]

It was only logical that bootleggers were going to take Springsteen at his word and provide the magic he had spoken about at the Winterland show, full knowing all of America that cared would get to hear it. Vicky Vinyl and partner Jim Washburn started with 450 numbered copies of a 3 LP box set called LIVE IN THE PROMISED LAND, containing the complete broadcast.

Surplus records from the first pressing were then issued in the beautiful gatefold sleeve with the stunning inner photo and the front saying “Winterland. 1978”.

“Actually, it is not clear if the box edition is a sort of limited edition or a cheaper package of advanced / early copies. The gatefold foldout edition is in fact more attractive than the box edition, and I guess there can be not much more than 450 around, maybe even less. So, they are both ‘originals’ in my opinion, even if for some strange reason, the box edition is considered much rarer….” [brucespringsteen.it]

– FULL TILT or KING TOOT labels, some on red vinyl

As the package obviously sold well, they then booted the Passaic, NJ recording as another triple box:

Original version is a box set with a five digit numbered slip sheet with Slipped Disc labels and the matrix marking SPRING A – F. Limited to 2000 copies, so number must be up to that only.  Numbers are either stamped or found on a round or square sticker. Likely, the first copies # 1 – 200 had the numbered stickers and from then on a stamped number was used. 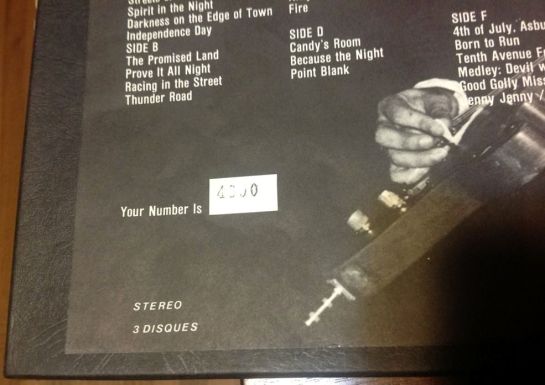 Later edition with a higher number in a four digit format. 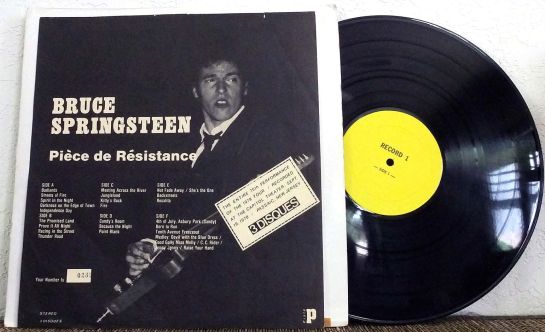 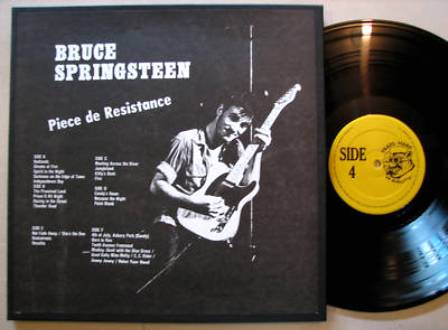 Different insert. Copied inserts exist as well. Among the label variations the following exist: ‘Blockhead’, blank, Full Tilt, Side 1-6 #, the above TMOQ ‘smoking pig’ ones and more. Later re=pressings are often reported to have slight sound deterioration.

While Vicky Vinyl/Andrea Waters “had no time for Springsteen’s music” to quote Heylin and these box sets were just a means for her to finance more Rolling Stones releases, things were quite different for Jim Washburn, the store manager of Beggar’s Banquet – her Anaheim record store. He was a Springsteen fan and had been with Lou Cohen when Springsteen was presented with a copy of THE JERSEY DEVIL after the Santa Barbara gym concert on 1 November 1975, observing ‘The Boss’ enthusiastic reaction to having been bootlegged for the first time.

Washburn: “Throughout the course of the [1979] lawsuit, I couldn’t believe that Springsteen was behind it. He must be uninformed, this guy who was going on stage and talking … about how lawyers shouldn’t run the world. I wrote him a letter – wrapped in a rare Ronettes picture sleeve – in which I asked to meet with him, and if he still thought I’d wronged him after explaining our side, I offered to do anything I could to make it up to him. I delivered it to the desk of the Sunset Marquis in Hollywood when he was staying there, and it was promptly turned over to his attorneys, who were not terribly nice about it. Having slept on sidewalks to get Springsteen tickets and all that … I still couldn’t believe Mr. Populist Rocker had gone corporate. As the suit was winding to a close, Springsteen was again in town for a series of concerts [Springsteen played four shows at the L.A. Sports Arena, 30 October to 3 November 1980 ]. I spent all the money I had getting a room at the Sunset Marquis in the hopes of talking to him. Which I did when he showed up poolside, and he made it clear that that’s what he had lawyers for, and to leave him alone.” [Heylin, E Street Shuffle: The Glory Days of Bruce Springsteen and the E Street Band]

In 1981, finally nailed down on the issue in an interview by Creem magazine, Springsteen said:

“Dave Dimartino: Why did you change your opinion about bootlegs?

Bruce Springsteen: I felt that there was a point there where, when it first started, a lot of bootlegs were made by fans, there was more of a connection. But it became, there was a point where there were just so many. Just so many that it was big business. It was made by people who, you know, they didn’t care what the quality was. It just got to the point where I’d walk in and see a price tag of $30 on a record of mine that, to me, really sounded bad, and I just thought it was a rip. I thought I was getting ripped, I wrote the music, the songs – it all came out of me! And I felt it was a rip, and the people who were doing it had warehouses full of records and were just sitting back, getting fat, rushing and putting out anything and getting 30 fucking dollars for it. And I just got really mad about it at one point. “

In the end – December 1980, Waters pleaded guilty to one count of copyright infringement and was fined $5,000 for that. Awarded to Springsteen in the civil suit were 43 times $50,000 for each violated music copyright, adding up to $2,150,000 and CBS received $1,500 and court costs of $105,573. However, neither party could collect on the judgement as Waters and Washburn had already declared bankruptcy, aided by the relatively long time span between the FBI bust and CBS’ filing their civil suit for damages.

As described in Heylin’s BOOTLEG book, the FBI had had been given Water’s name several months prior already, when a Canadian retailer, Michael Mess decided to name her, Ken, Kurt Glemser and John Wizardo as the real people behind “a Long Beach bootleg ring”. A Malcolm Moore was identified as responsible for pressing the K&S titles. On 22 February 1980, the FBI and RCMP raided 150 people in the same day, from Georgia to California to Ontario, Canada, trying one and for all to stamp out this bootleg business. While some players were stopped, we know today that it did little to stem the tide. As Heylin puts it: “… the FBI failed to severe the cord between manufacturer and punter.”, and producers abroad, especially Europe and Japan were just getting started. However the bust of 1980 wiped out most of the second generation labels/producers, with the exception of Ken, who had moved to Spain by that time.

Canadian police evidence number stamp applied following the raid and confiscation at the Hot Wacks Press office in 1980. Item later purchased from Kurt Glemser after he received it all back.

Jim Washburn later pointed out in OC Weekly that, “despite the headlines about the $2.1 million ruling, the glut of other bootleggers’ Bruce boots was just beginning.”

I was sent this list for the UL, dated May 1980 and the question is, could Andrea ‘Enthal’ be an alias used by Vicky Vinyl?