Just before we get to a tasteful display of the thin white duke, it’s time for the bi-annual blog break. See you in October!

Extremely rare advance pressing on multicolored wax, which was in the end not used for the finished product. 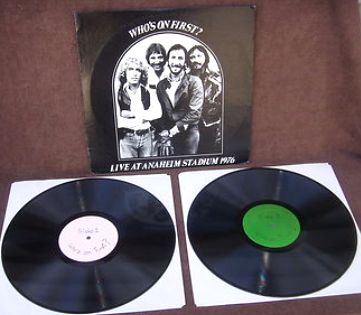 Back of the album with images taken at the actual show.

Comments (from thewo.net):  “The sound quality of this recording is quite poor. It appears to have been taped from far out in the crowd, though the show itself was pretty decent. The back
cover features small pics from the venue as well as the date of the recording. Track 3 [they must mean 4] on side 2 is allegedly an at-that-time unreleased PT pre-Tommy track. The last track
on side 4 contains Girls Eyes which, at that time, may with all likelihood also have
been an unreleased song. This is the 8th show of the 1976 U.S tour and according to
the authors of The Who Concert File book allegedly the only outdoor show played in
the U.S that year, though this is in error as The Who would play several other out-
door venues that year most notably Bill Graham’s Day On The Green. The authors
go on to state that “it was at this show that Pete suffered immediate and noticeable
hearing loss right from the opening guitar chord and Roger’s first vocal.” (p. 174).”

IMP 1112 + K&S 003: The Rolling Stones – Bring It Back Alive has been previously analyzed here