From an eBay seller not used to early 70s audience recordings: “1971 mediocre recording from the Anaheim Convention Center in Anaheim, CA on March 21, 1971. The band included Carole King (piano), Danny Kortchmar (guitar), Leland Sklar (bass), and Russel Kunkel (drums). This recording was re-released later (slightly reshuffled) as Live at the Anaheim Convention Center and Tailor Made.”

From allmusic.com:  “On February 17, 1971, Johnny Cash presented a special episode of his television program in which he traveled to Vanderbilt University to film a few scenes in which he talked with students, who also comprised the audience for him and other musicians in the performance scenes filmed in Nashville’s Ryman Auditorium. It’s sometimes forgotten that Cash featured a good number of rock acts on his show, and perhaps because of the “campus” theme,
his guests on this particular episode were from the folk-country-rock worlds rather than pure country circles. This bootleg DVD, On Campus, contains the episode, which features not only Cash but also James Taylor, Neil Young, Linda Ronstadt, Tony Joe White, and (doing comedy) a young Albert Brooks. […] it’s an interesting opportunity to see rarely screened footage of both Cash and the others. Neil Young is captured just at the time he was rising to solo superstardom, performing unaccompanied versions (on guitar) of “The Needle and the Damage Done” and (on piano) “Journey Through the Past.” Linda Ronstadt isn’t a big star yet, and is seen here doing a pretty good cover of Emitt Rhodes’ “You’re a Very Lovely Woman,” the lyrics changed to reflect a woman’s point of view. Cash also does a few numbers, including his first public airing of “Man in Black,” […].”

The Rubber Dubber issue had a different song line up (“Steamroller Blues” moved to side 2 and the ‘On Campus’ special is not mentioned).

Regarding the gatefold inside, a variant exists that has the text on the left and the photo on the right,

Although Hot Wacks states that the 2LP set TAILOR MADE is a Rubber Dubber release, this is actually not true. TMI Records may also have also been behind Janis Joplin – Get It While You Can and Carole King’s Fit For A King (and others). 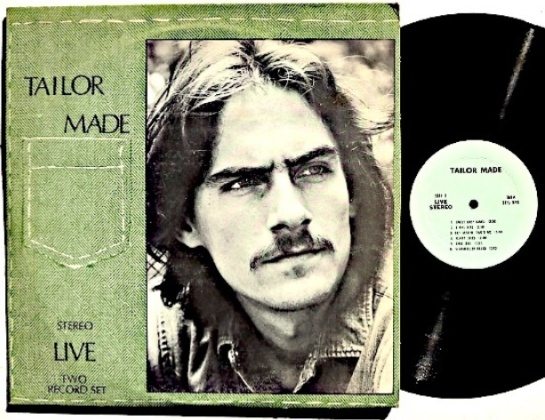 Dittolino Records copy (right down to the label) of sides 1 and 2 of the double albums only (the insert track list is incorrect here as it lists the side three songs of the Rubber Dubber and TMI versions):

I have revisited these releases in an updated post; click on this text to be taken there.