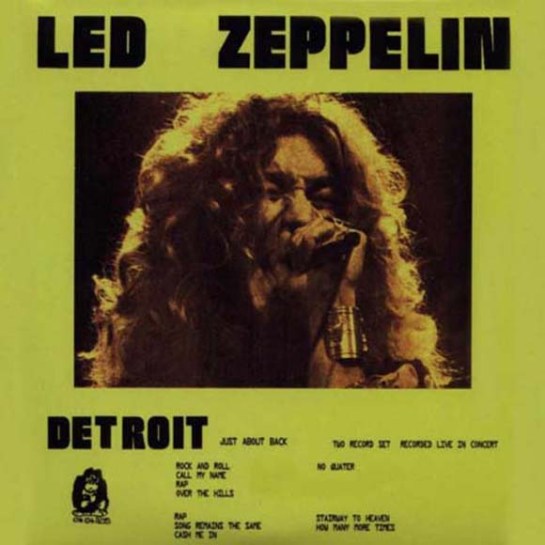 Another CBM original. I would place the release date around spring or summer of 1975.

Side 1: Rock & Roll / Sick Again (listed as Call My Name) / Rap / Over The Hills And Far Away
Side 2: Rap / In My Time Of Dying (not listed) / The Song Remains The Same / The Rain Song (listed as Cash Me In)
Side 3: No Quarter
Side 4: Stairway To Heaven/How Many More Times medley incl. The Hunter
Recording: Fair mono audience. Source: Olympia Stadium, Detroit, Michigan Jan. 31 ’75.

However, on a Japanese bootleg blog (that contained this word of warning: “needle jump record quality is bad”), the track listing is given as:

SIDE-A: ROCK’N ROLL/ SICK AGAIN/ OVER THE HILLS AND FAR AWAY/ IN MY TIME OF DYING (CUT)
SIDE-B: SONG REMAIN THE SAME/ THE RAIN SONG (CUT)/ KASHMIR
SIDE-C: NO QUARTER
SIDE-D: STAIRWAY TO HEAVEN/ HOW MANY MORE TIMES -DAZED CONFUSED-THE HUNTER-LITTLE SQUEEZE

From theyearofledzeppelin.com: “Plant continues to have trouble with his voice, struggling to retain some sense of melody during the opening numbers. Page begins to warm up during the guitar solo at the end of Sick Again. As the song ends, Plant tells the crowd “it’s our great pleasure to be just about back.” Page and Jones lose each other for a moment at the end of the guitar solo during Over the Hills and Far Away. In My Time of Dying is introduced as “what you might call… traditional.” Page’s fingers fly across the fretboard during The Song Remains the Same. No Quarter is absolutely fantastic. The instrumental section is an epic journey.

Bonzo is introduced as “the man who made Led Zeppelin a legend” before Moby Dick. While introducing what will prove to be the final appearance of How Many More Times, Plant tells the crowd “we decided about a week ago that we should start doin’ this again, cause we haven’t done it for about six years… it’s called jerkin’ off.” The band seems lost in the arrangement, unsure about what comes next. Unfortunately, the song is cut just before the final “gun!” Page’s fingers become hopelessly entangled in the strings during the show-closing Black Dog.
The tape is clear and well-balanced, if a bit noisy at times. “
**** 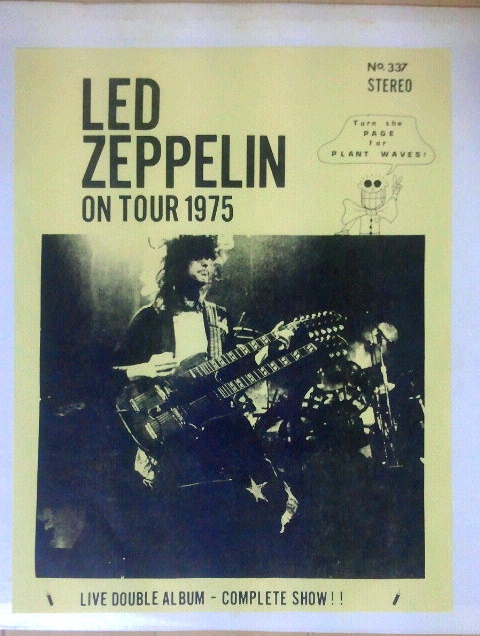 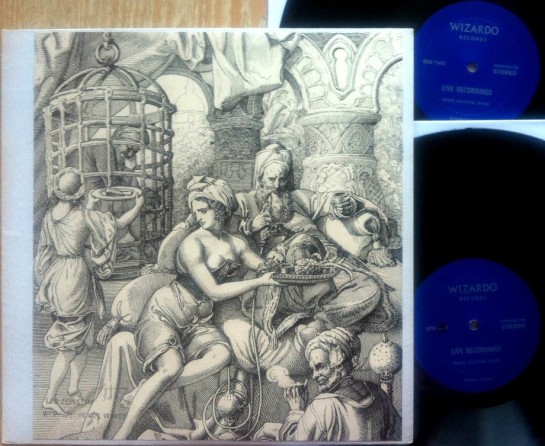 Side 1: Rock & Roll/Sick Again/Over The Hills And Far Away/In My Time Of Dying*
Side 2: Kashmir/Trampled Under Foot*/How Many More Times medley incl. The Hunter
Side 3: No Quarter/The Song Remains The Same
Side 4: Stairway To Heaven/Whole Lotta Love*/Out On The Tiles Intro-Black Dog*/Heartbreaker*
Recording: Fair mono audience except (*)Good mono audience. Source: Olympia Stadium, Detroit, Michigan Jan. 1 ’75 except (*)Madison Square Garden, New York City, New York Feb. 7 ’75.
Alternative track listing from the aforementioned Japanese blog:
SIDE-A: ROCK’N ROLL/ SICK AGAIN/ OVER THE HILLS AND FAR AWAY/ IN MY TIME OF DYING *
SIDE-B: KASHIMIR/ TRAMPLED UNDERFOOT * (FADE OUT)/ HOW MANY MORE TIMES (FADE OUT)
SIDE-C: NO QUARTER/ SONG REMAINS THE SAME
SIDE-D: STAIRWAY TO HEAVEN/ WHOLE LOTTA LOVE-BLACK DOG */ HEARTBREAKER *
https://www.youtube.com/watch?v=lUSB-aPKNII
Did Wizardo copy the Detroit tracks from King Kong/Contraband or not? Hot Wacks claims that the WRMB title is in stereo and sounds better overall – these quality ratings are very subjective, of course. I did read through a translated/verbally mutilated? version of the blog post but I left none the wiser regarding the author’s findings, except for “…WRMB337 […] does not seem to be a sound quality degradation”. I would love to A/B both titles but the cost of acquiring either of them is quite high, despite the availability of higher quality CD sources.
***
More from the 7 February Madison Square Garden would appear on this extremely rare no label release:

Could they see anything with these ‘behind (the) stage’ tickets?

Onstage at the Olympia and a review below.