Review from a Cream bootlegs site: ” “Klooks Kleek” was a club in the “Railway Hotel”, Hampstead, London. It was a popular venue on the performance circuit because of its blues aware audience. On Tuesday 15th November, Cream performed and was recorded there.

John Platt claims that it may have been an ‘official’ attempt to record a live album. Based on the available bootleg, it was an amateurish effort, if that story is true. It is reasonably recorded, considering the era, but the mikes were continuously ‘clipping’. The engineer was also varying the volume controls to handle the volume. The stacks were turned up high! Balance is good with only the vocals slightly distant. The recording appears to be of the end of their first set and the start of their second.

Eric’s Les Paul/Marshall stack sound and playing is mature ‘Bluesbreaker’. Jack and Ginger are relatively restrained, compared to later performances, and can be accurately described as a ‘rhythm section’ for this performance. An important recording that shows that ‘Fresh Cream’ quite successfully captured their live performance of 1966.

The opening number is close to the ‘Bluesbreaker’ album performance. The Les Paul/Marshall stack sounds magnificent even without the tonal density of the overloaded combo. The major difference is the lithe and flexible rhythm section.

This shows how closely the studio version captured the live performance. Eric includes a feedback loaded passage in his fine solo.

Their only known recording of this blues. A clear example of their beat shuffling approach that could give a routine blues a unique tilt. Jack in shout mode.

Closes the 1st set and LP side. Well reproduced in the studio but, like Sweet Wine, more of a pop performance. During the guitar solo the nascent blowing elements are present.

Eric introduces it as a Junior Wells song and it follows his arrangement. Probably the best available version.

This is given an extended work out. The 1968 live recording shows only a modest development of the arrangement. A fine performance all round with Jack still developing his vocal technique.

The LP opens with Clapton’s Bluesbreaker opus and now closes with the song that was to become his Cream opus. The arrangement is complete and it was the technical development of the band, collectively and individually, that was to bring the masterpiece to finalisation.”

Contraband offered the same material as sides 1 & 2 of this set: 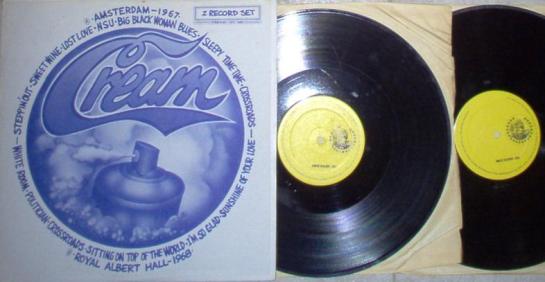 Lovely design but ****ty sound (Hot Wacks: “Horrible mono” – compared to “Vgs” for the ZAP LP). Still, I do have a soft spot for CBM titles and will try to cover all of them in the future and pinpoint the release dates of their output.

Attributing this to Amsterdam was just something CBM had made up.