Which is a copy of this European bootleg [hats off to the designer for the tasteful job ]: 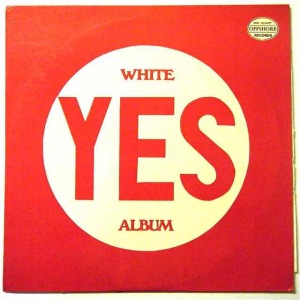 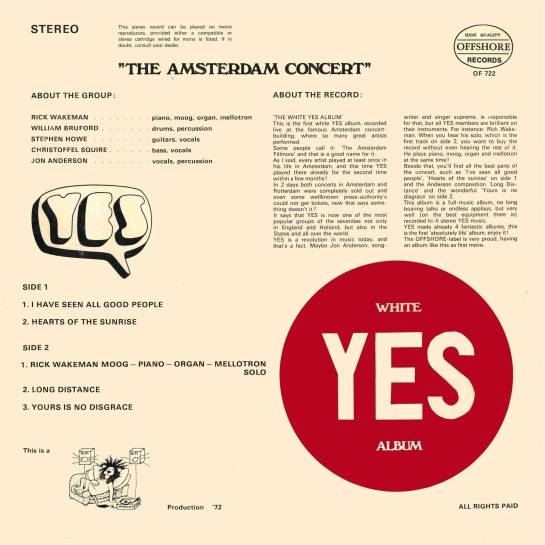 Enthusiastic review from yesshows.blogspot.de:
“This is one of the best bootlegs from Fragile tour. Best in sound quality and performance, because sadly “Heart of the Sunrise” lacks the first verse (but retains most of the introduction), “The Fish” is also truncated and some of the “Yours Is No Disgrace” solo has been cut out. Presumably these edits were made to fit it onto vinyl back in the day, although it’s not that long – just under forty minutes in total!
Maybe Jon Anderson, song-writer and singer supreme, is responsible for that, but all YES members are brilliant on their instruments. For instance: Rick Wakeman. When you hear his solo, which is the first track on side 2, you want to buy the record without even hearing the rest of it. He plays piano, moog, organ and mellotron at the same time!
Beside that, you’ll find all the best parts of the concert, such as ‘I’ve seen all good people’, ‘Hearts of the sunrise’ on side 1 and the Anderson composition ‘Long Distance’ and the wonderful ‘Yours is no disgrace’ on side 2.
The album is a full-music album, no long boring talks or endless applause, but very well (on the best equipment there is) recorded hi-fi stereo YES music. YES made already 4 fantastic albums, this is the first ‘absolutely life’ album, enjoy it!”

“This Dutch album on Offshore Records is the definitive recording of this show. Forget the CD reissue – I have it, it stinks. Upon listening to this record, I found it to be running noticeably slow. It was pitched by ear on the turntable, resulting in an improvement in the sound quality.

This is one of the best Yes performances around, don’t miss it!”