Review on Allmusic: “Scrapbook is an appropriate title for this bootleg LP of 1975 because it doesn’t focus on any one concert exclusively and contains live and studio recordings from a variety of sources. Depending on the source, the sound quality can be either excellent or merely decent. The sound quality is first-rate on various studio rarities (including an outtake of “Little Miss Fortune” and a remake of Free‘s “Easy on My Soul”) as well as Bad Company‘s live performances of “Movin’ On,” “Ready for Love,” and “Can’t Get Enough” on the 1974 television program A Decade of Electricity. (Note: the Decade of Electricity material can also be heard on the Trademark of Quality bootleg In Concert, which is among the few bootleg EPs that came out in the 1970s; back in the days of vinyl, bootlegs were almost always LPs.) Meanwhile, the sound quality is merely decent on performances of “Good Lovin’ Gone Bad” and “Shooting Star” in Japan in 1975. Scrapbook isn’t recommended to casual listeners, but for hardcore fans, it is one of most pleasing Bad Company bootlegs of the 1970s.” 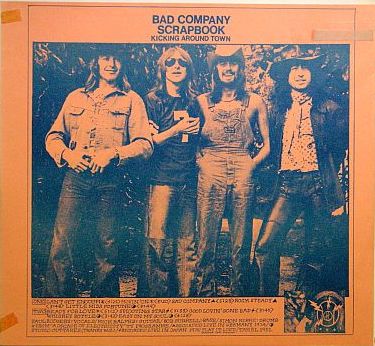 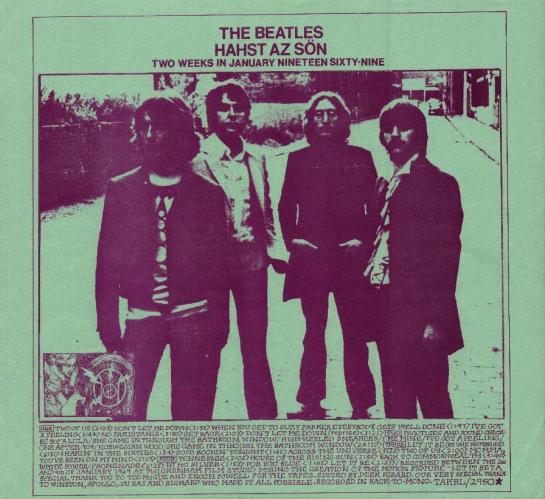 TAKRL says: “When the Doctor heard CBM`s four record set called ‘Sweet Apple Trax’, he timed and listened and figured out that this amazing material could easily fit on a mere two discs in a logical, enjoyable sequence. He set out with razor blade and tape and this collection resulted. First edition front and back covers.”

[ Or in other words, “hey there is a release waiting for an easy rip off”. However, the good doctor was right regarding the length of the CBM discs. These stayed well under the limits for vinyl pressings. ]

“In [December] 1974 the first completely unreleased Twickenham outtakes surfaced on the legendary “Sweet Apple Trax” LPs. These were originally released as two two-LP sets by CBM using the Instant Analysis label (matrix numbers 4182-REV-2000 and 4181-STD-2002). This phenomenal series was among the most enjoyable vinyl bootlegs of its era, and many of us listened to it for hours on end, leading to a lifelong addiction to this stuff.  By the way, these LP’s were originally announced under the title “The Apple Treasure Chest Masters, Vol. 1 & 2”.  When they finally appeared, they had “deluxe” printed sepia-toned jackets.  A late ’70’s repress from the original plates came with blank white labels and black and white covers which were copies of the originals. 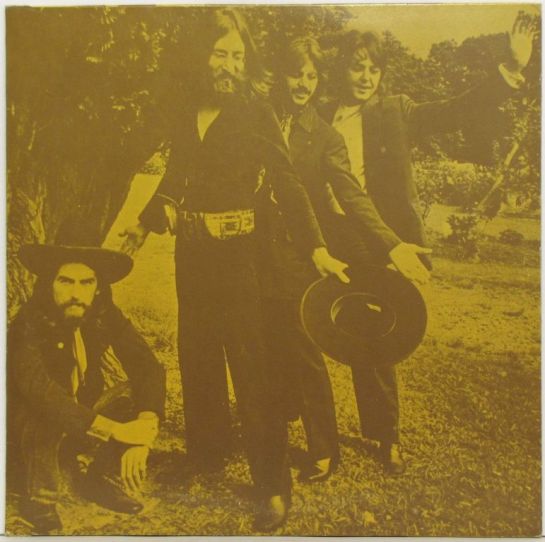 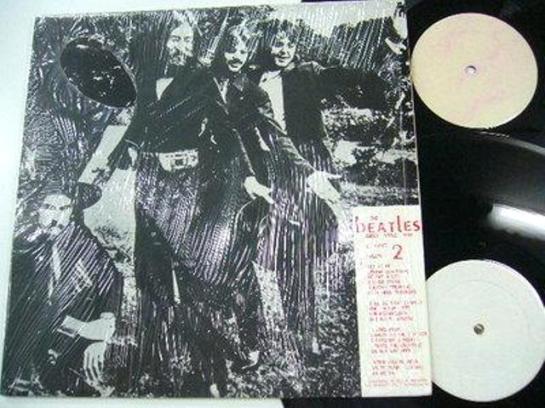 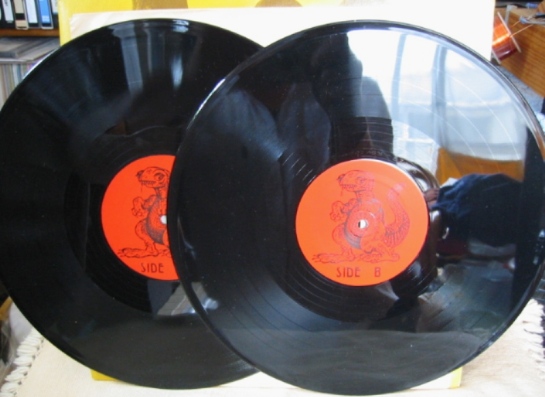 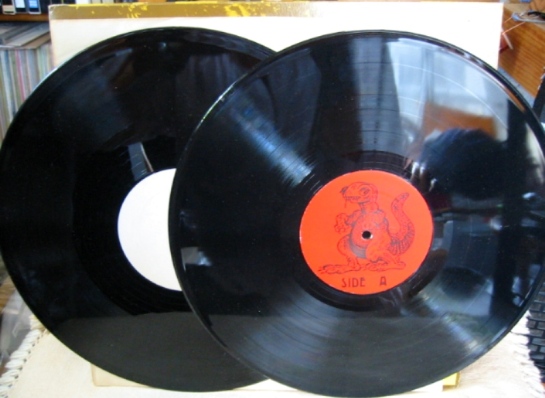 Wizardo Records released their own double set on colored wax around late 1975 as well (# 343). These must have been a limited pressing as little evidence of these sets can be found around the internet, especially of a colored set (an image of one on black wax with ‘Old Glory’ labels does exist):

“The “Sweet Apple Trax” LPs were copied almost immediately by Kornyphone, which combined the material onto a single double set called “Hahst Az Sun” (TAKRL-2950).  This prompted CBM to remaster their own release as a double album in order to compete.  It was distributed under the title “Hot As Sun” (matrix number 4216 REV 2000 / 4217 BLD 2002) on the Instant Analysis label. ” 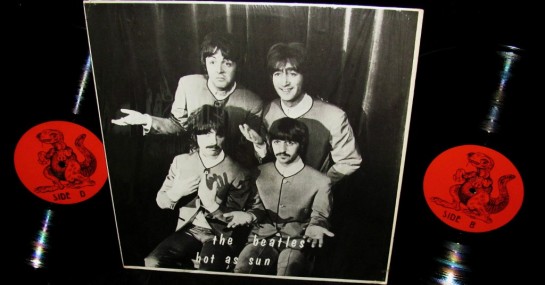 “In 1980, single LP repressings of “Hot As Sun” were distributed as “Sweet Apple Tracks Crate 1” and “Sweet Apple Tracks Crate 2”.  It might be noted that the Kornyphone issue “Hahst Az Sun” rearranged the songs and omitted a few seconds here and there.  This set was copied many times and reissued on a variety of single LP bootlegs, and with a full color cover as “Sweet Apple Trax” on the Newsound Records label (matrix NR 909-1).  The Newsound plates were also used for picture discs which came out under the titles “Sweet Apple Trax Vol. 1” and “Sweet Apple Trax Vol. 2”.  The original source tapes were remastered by Audifon records for the first 2 records of the 3 LP set “The Beatles” (commonly known as “The Black Album” released in May, 1981).  These plates were subsequently used for the first three albums of the original “Get Back Journals” vinyl boxed set.  More recently, an hour of the original tapes were released on CD in “Songs From The Past Vol. 3”.  All of the material was included on the first “Get Back Journals” CD set.”

In 1976, sides 1 & 2 also appeared as this title on Ken’s Aftermath reissues side label:

Sides 3 & 4 saw yet another reincarnation when it kicked off this Beatles reissue series on sister label The Kornyphone Label For The Working Man in the same year:

Contraband was not yet done with this material as they gave it another go ca. 1975/6: 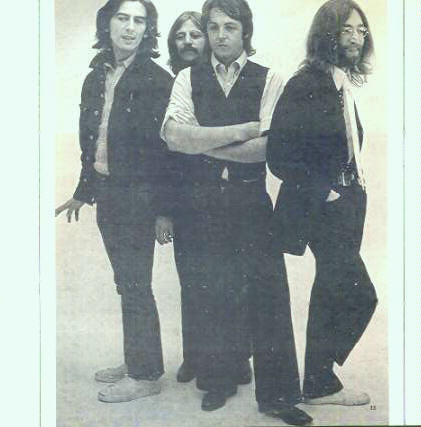 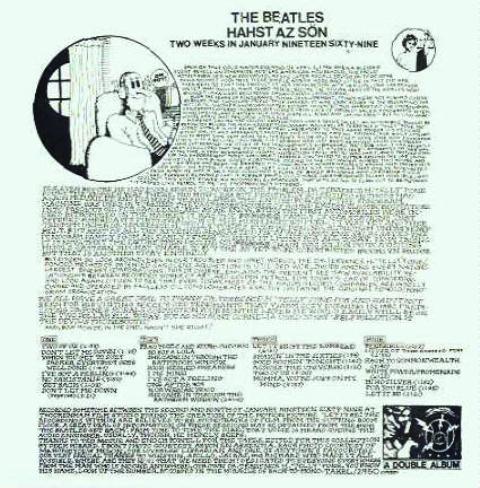 And another with a color cover on Ken’s Phoenix label, ca. 1980:

On Ken’s GLC label, at least some of this material was then re-packaged as a 3x 2LP set called Apple Trax: Volume 1, 2, 3

Volume 1 is supposed to contain the following tracks: Old Hillbilly way, House of the rising sun, Get off white power, Yackety Yack, For you blue, Let it be, Get back, Don’t let me down, On our way home, Suzy Parker, No Pakistanis, Let it be, Silver spoon, High heeled sneakers, I me mine, One after 909, A long road, Shakin’ in the 60’s, Across the Universe, On our way home, Momma, you’ve been on my mind, da de da

TAKRL says: “During the last days, the upper-powers-that-were lost cover copy and issued this under a differing title in a most unfortunate cover. Only 100 originals survived.”

[I would imagine that this is the “most unfortunate cover” mentioned:] 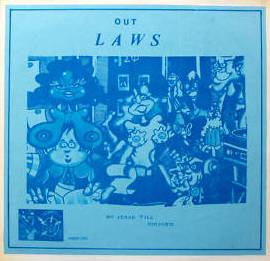 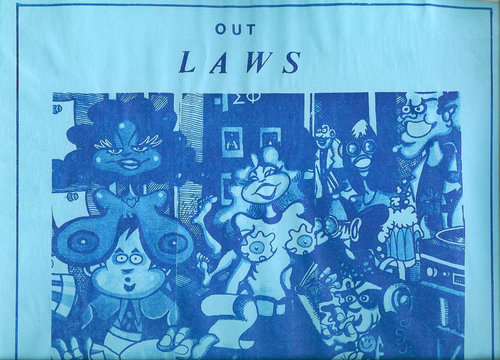 SIDE ONE : Stick Around For Some Rock ‘N’ Roll / Song In The Breeze / Freeborn Man / It’s Gonna Be A Long Time Till I See You Again

From a website, where this LP is for sale for 80 Euros:

TAKRL says: “Another TMQ re-issue like The Who above. Not a failure this time. Only 1000 copies though.”

From a Tull Message Board in response to “What is your favorite Tull bootleg”:

3.”Supercharged” July 1973 LA This is still for me the best sounding boot of “A Passion Play” 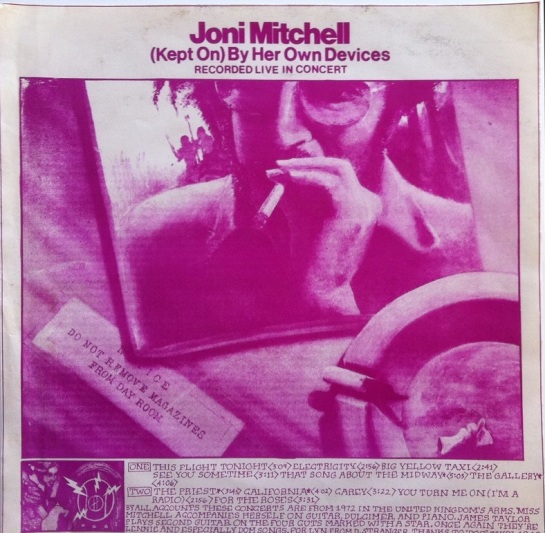 “According to Joni Mitchell’s official site the bulk of this material is from a bbc2 TV program called ‘Sounds for Saturday’ and the date given is May 19 ’72 (either recording or broadcast date). Tracks 5, 6, 7 & 8 are from an ‘In Concert’ radio show ,also on the BBC, from the Paris Theatre London on October 29 ’70 and often erroneously referred to as from ‘the Albert Hall’.”

You can listen to the album here: http://www.mocm.ca/Music/Title.aspx?TitleId=318273 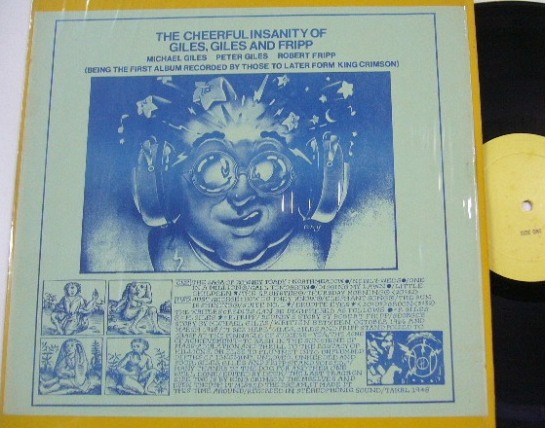 TAKRL says: “The popularity of this collection helped English DECCA reissue the original.”

The Saga of Rodney Toady:

“In the Jan. of 1975 I came by this album on a TAKRL bootleg LP. With Exploding Head coversheet! and Brand New in a plastic wrap! It contains two pieces that even my boss would listen to at work: Suite No.1 and Erudite Eyes. In the seventies the record seemed dated and somewhat pretentious, because the seventies was so far away from the sixties, but it has become a period piece that demonstrates Mr Fripp’s musical dexterity and potential of direction. Late in the 90’s I saw Cheerful on CD for the first time (albeit secondhand), and realised that I think I do prefer KC on vynal, scratch and hiss and warts and all. It’s a friendlier sound, more personal. I recommend also two other bootlegs: HERETIC:Long Lost at last… and Un Reve Sans Consequence Speciale.”

‘one and a half nelson’ is probably one of the best known sparks live recordings. recorded at Croydon U.K, 9th of November 1975. 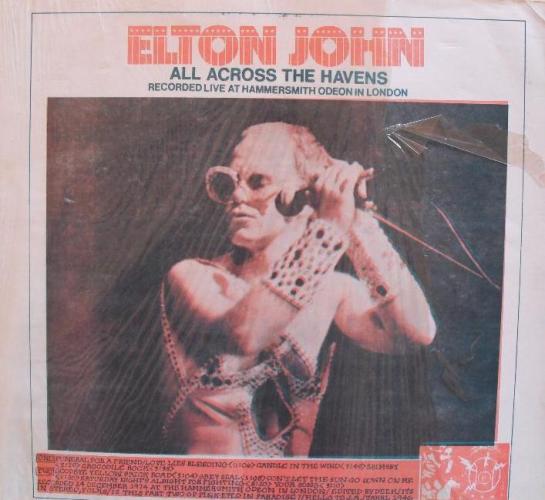 TAKRL says: “We tried a curious color printing process on the first edition cover that was never in register. Last issue with the original TAKRL labels. Same story about back cover.”

In 1976, Wizardo Records presented (copied?) all tracks from the 1974 Christmas show on a double album: 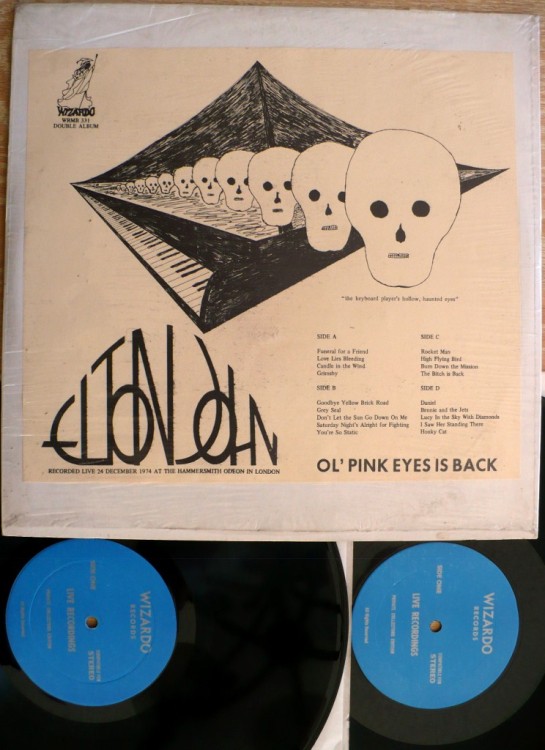 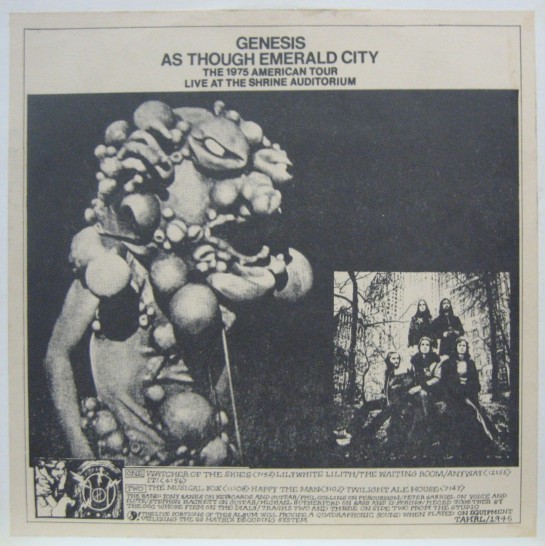 Side One: Watcher Of The Skies / Lilywhite Lilith / The Waiting Room / Anyway / It !

Another legendary KBFH recording utilized by TAKRL, which can be listened to on wolfgangsvault in full: http://www.wolfgangsvault.com/genesis/concerts/shrine-auditorium-january-24-1975.html?

TAKRL says: “An experiment in the issuance of a double intended LP as two single ones. The phrase ‘Pink eyed in paradise part one’ appeared on a never used back cover.”

Elton John’s December 24, 1974, show at the Hammersmith Odeon in London resulted in different bootlegs from different underground labels of the 1970s. TAKRL (one of the decade’s top bootleggers) documented the show with two separate LPs, All Across the Havens and Just Like Strange Rain, while Wizardo came out with the two-LP set Ol’ Pink Eyes Is Back. Collectors were thrilled to acquire this double-LP; the sound quality is generally quite good — obviously, this is a soundboard recording — and John’s set is rewarding more often than not. After opening with “Funeral for a Friend/Love Lies Bleeding,” the singer keeps his London audience happy with hits that range from “Bennie and the Jets,” “Saturday Night’s Alright for Fighting,” and “The Bitch Is Back” to “Daniel,” “Rocket Man,” “Honky Cat,” and “Don’t Let the Sun Go Down on Me.” Ol’ Pink Eyes Is Back, which gained a reputation for being one of John’s best bootlegs, was only in print for a few years. When the FBI went after bootleggers aggressively in 1976 and 1977, Wizardo was among the illicit labels that was put of business. And after Wizardo’s demise, Ol’ Pink Eyes Is Back became more and more of a collector’s item.”